Lee Eun-hee, a 38-year-old lawyer, decided to visit Osaka in Japan with a friend in early November last year and set a new motto for this trip: spend less money on sleeping and focus more on eating and shopping.

She downloaded the Airbnb application on her smartphone and searched for a suitable room close to a subway station and the large shopping districts of Dotonbori and Namba. 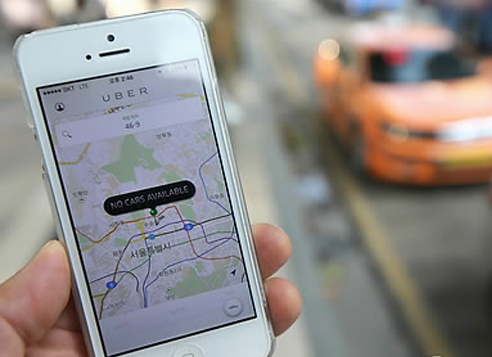 (Yonhap)
On the app, it shows a list of apartments and guest houses uploaded by homeowners who have spare rooms or houses to share.

Lee's choice was a small apartment near Namba station, costing around $30 per night with a free portable pocket wifi device. She contacted the owner for an early check-in and late check-out through e-mail.

"On Airbnb, you can find a variety of rooms, ranging from an expensive hotel room to cheap dormitory rooms that are vacant during school vacations," she said. "I could choose one of the chambers that fit my needs."

San Francisco-based Airbnb is one of the world's most well-known companies engaging in the so-called "sharing economy," referring to a new type of economic model that links a supplier who owns underused assets with a prospective borrower via online platforms.

The new model has been gaining popularity in many areas as the development of information technology and the spread of smartphones is making it easier to match supply and demand.

The sharing economy ranges from hospitality services like Airbnb and Onefinestay, car-sharing or driving-sharing businesses such as Uber and RelayRides, to crowdfunding and sharing physical or human resources.

A person who wants to rent out his or her vehicle while not using it can post it on a related website to seek someone willing to borrow it during an exact time. A company like Airbnb and Uber just runs the brokerage platform and earns commission without physical assets like hotels and passenger cars.

"Economic welfare of players in the sharing economy increases as transaction costs fall and new deals are created," said Kim Min-jung from the Korea Development Institute, a state-run think tank based in Sejong. "Asset owners have another source of money through their unused possessions, while borrowers can enjoy more quality goods at lower prices."

But the expert noted that the existing laws and social system which were established to regulate conventional transactions between consumers and suppliers are unable to keep up with the advent of the sharing economy.

Last year, Airbnb said it deleted lists of South Korean rooms from "officetels," multi-purpose buildings with residential and commercial units, as local laws ban officetel owners from the lodging business without reporting to the government. Nearly 70 percent of the listed hosts were breaking the law.

Uber Korea was sentenced to a fine of 10 million won ($8,900) for violating a local law that prohibits car rental companies from running a taxi business with leased cars.

Also, these businesses face criticism for avoiding safety regulations and taxations. Hosts can lend their vacant homes and get money from tourists but don't pay the associated taxes, while hotel and hostel companies are regulated by strict fire emergency rules and must pay due taxes.

In some areas, however, institutions and laws have failed to keep up with the new business trend, especially in the crowdfunding sector, as startups and small firms worry that their business will suddenly be considered illegal.

"A lack of system and regulation has kept the sharing economy from growing in South Korea. Young entrepreneurs tried to start businesses but failed as no one knows how to go about it," said Kim. "This is why foreign-based firms like Airbnb are able to take the first-move advantage in the South Korean market."

She said it is necessary to lay down a legal and institutional foundation in tandem with the rapidly changing economic environment so as to help such businesses grow and develop. (Yonhap)