GENEVA -- South Korea and Japan were divided over the usage of "East Sea" in naming the body of water between the Korean Peninsula and Japan as a conference of the International Hydrographic Organization opened in Monaco on Monday, South Korean officials said.

Koreans claim that East Sea has been used for more than 2,000 years. But the name was not known internationally in modern times because the Korean Peninsula was under Japan's colonial rule from 1910-45. 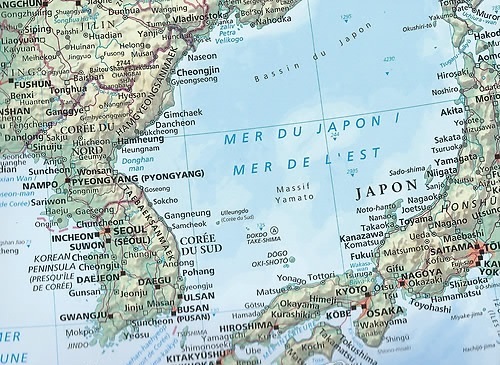 This provided photo shows the body of water between the Korean Peninsula and Japan being called both "the East Sea" and "the Sea of Japan" in the 2015 World Atlas published by French newspaper Le Monde. (Yonhap)
In contrast, Japan demands that the waters be called "the Sea of Japan," as that name has been used internationally since the 19th century, even before the peninsula came under Japanese colonial rule.

At the IHO's 19th general assembly, a South Korean delegation consisting of 30 government officials and private-sector experts plan to have the organization's publication "Limits of Oceans and Seas" revised to include the East Sea.

The publication, also known as S-23, is designed to serve as guidelines on the limits and names of oceans and seas for the benefit of national hydrographic offices in compiling nautical charts. It at present refers to the waters between the two countries only as the Sea of Japan.

S-23 was last revised in 1953, but discord over how to name the sea between the two neighbors has hampered the revision efforts.

South Korea has wanted East Sea and Sea of Japan to be written until an agreement is reached. Currently, the Sea of Japan is more widely recognized around the world, but a growing number of maps use East Sea along with the Japanese name, experts say.

During Monday's meeting of the five-day conference, the two sides locked horns over the name of the water body.

"It appears to take more time for participants to come to a conclusion, and the issue will continue to be discussed," a South Korean delegate said after attending the day's meeting.

The Monaco-based IHO will put the issue on the agenda again on Friday, the final day of the general assembly, amid the possibility of the organization putting off a formal decision on the matter and delaying it until the next general assembly five years later. (Yonhap)