South Korea will help more local universities provide quality education in the software sector as part of its drive to develop the industry and nurture more talent, the science minister said Monday.

The Ministry of Science, ICT and Future Planning picked eight schools in 2015, six in 2016 and six in 2017 as "software-oriented universities" and invested nearly 2 billion won ($1.75 million) in them annually. 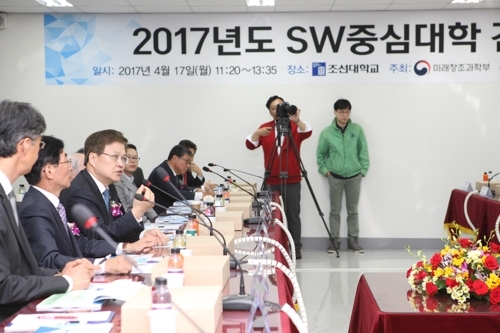 (Ministry of Science, ICT and Future Planning)
"The ministry will select five more software-oriented universities annually to bring the number to a total of 30 by 2019," ICT Minister Choi Yang-hee said during a meeting with the university presidents.

The ministry has been fostering closer ties between universities and companies so as to allow the country's software education sector to become more globally competitive. This is critical since the size of the industry will likely expand to 100 trillion won this year from 31.2 trillion won in 2012.

"The government hopes that software-oriented universities will play pivotal roles in dealing with the shortage of experts in the software sector," the policymaker said, emphasizing the importance of software education as being central to leading the ICT industry.

Under the plan, schools and companies will exchange information and engage in software projects, as well as conduct joint research.

Experts have pointed out that local companies trail overseas leaders in training software experts, mainly due to relatively poor infrastructure at schools.

"The ministry will also work with the Ministry of Education to offer an innovative software curriculum," said Choi. (Yonhap)