A painting by Korean abstract artist Kim Whan-ki has been sold for 6.55 billion won ($5.74 million) on Wednesday, making it the most expensive South Korean artwork ever sold.

At an auction held in Seoul, Kim's "Tranquility 5-IV-73 #310" with his signature style of blue dots and a white-edged square broke the previous record of 6.32 billion won set by the very same artist during an auction held in Hong Kong last November with a painting named "12-V-70 #172."

The auction for the 205-by-261-centimeter painting started at 5.5 billion won, but the price quickly escalated and reached well over 6 billion won, finally settling at 6.55 billion won. 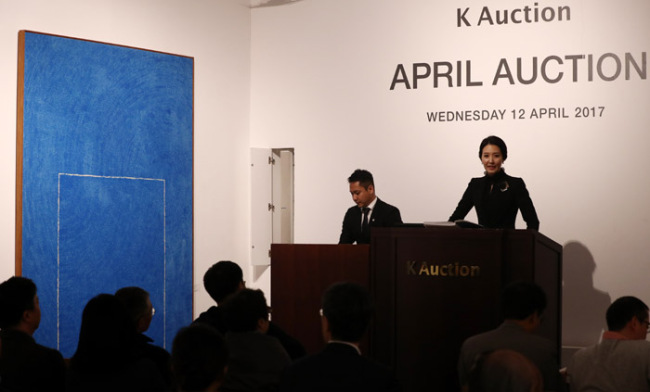 (Yonhap)
A native of the small fishing town of Shinan, southwestern Korea, Kim (1913-1974) was one of the country's pioneers of abstract art. In early 1960, he moved to New York and stayed there until his death in 1974.

An official from the auction company said that the painting that Kim painted in New York a year before he died oozes a powerful sense of life and lyricism.

"The space division gives it excellent aesthetic value and it has a very high level of completeness," the official added.

The late artist wrote about the painting in his journal dated April 10, 1973, "I finished two thirds (of the painting). I will do the finishing touches after it becomes completely dry. How lonely I feel after Picasso died."

Kim's artworks have now broken the sales record four times in an 18-month period, starting with his painting named "19-VII-71 209" that surpassed the price of Park Soo-keun's "The Washing Place" in October 2015 after it was sold for 4.72 billion won. And, with the latest sale, the six most expensive South Korean artworks traded at domestic and foreign auctions all belong to Kim. (Yonhap)