South Korea and the United States will wrap up an annual command-post exercise later Friday, while their joint field training is to continue through the end of next month, according to officials.

"Today is the last day of the Key Resolve training. There will be a comprehensive review of the results (of this year's exercise)," a South Korean defense official said. 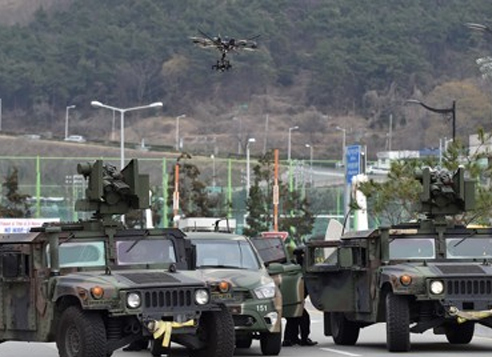 South Korean and US armed forces conduct their annual joint military training in this file photo. (Yonhap)
Key Resolve is a simulation-oriented practice based on various war scenarios. This year's drill, which kicked off on March 13, has been joined by around 13,000 American troops including those stationed outside the peninsula, up 3,000 from last year.

This year, a source said, they trained for a military strategy, code-named Operations Plan (OPLAN) 5015, for a prompt response to a North Korean attack with a preventive strike on main targets.

The so-called 4D operation to detect, disrupt, destroy and defend was also practiced along with a simulation test of a multi-layer missile defense system using existing Patriot missiles and the Terminal High Altitude Area Defense (THAAD) to be deployed here.

The allies plan to continue the Foal Eagle, a field-training exercise, till the end of April, which involves about 7,000 US soldiers.

Around 300,000 South Korean troops have been mobilized for the Key Resolve and Foal Eagle drills, which are key annual bilateral drills together with Ulchi Freedom Guardian (UFG).

The allies stressed the importance of the joint military trainings, defensive in nature, to enhance their combat readiness.

Pyongyang has long called for a halt to the drills, labelling them as a rehearsal for invasion.

On his trip to Seoul earlier this month, US Secretary of State Rex Tillerson made it clear that his country has no plan to stand down the operations.

"We've been carrying out these joint military operations for over 40 years. When those operations are to be undertaken, it is with clear transparency," he said. "We announce to the world that we are going to carry out these operations, so there is no surprise to anyone." (Yonhap)