Bulgaria on Wednesday pledged to continue to take "all necessary measures" to implement the latest UN Security Council resolution adopted last year to punish North Korea for carrying out its fifth nuclear test.

In a statement released by its foreign ministry, Bulgaria said its has implemented a fresh restriction on transactions in North Korean coal and reduced the number of staff at the North's diplomatic mission in its capital. 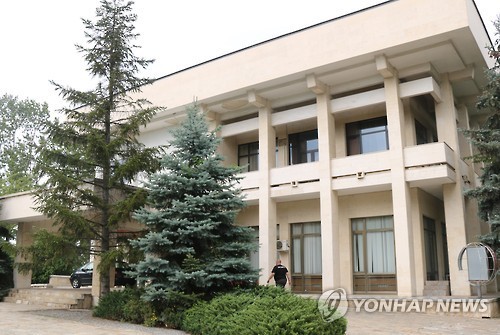 The North Korean Embassy in Bulgaria (Yonhap)
The Sofia government recently submitted its implementation report to the UNSC, it said.

The UNSC adopted Resolution 2321 in late November following the North's fifth nuclear test in September. The latest resolution focused on restricting Pyongyang from getting its hand on hard currency including a curb on its coal exports.

In that report, Bulgaria said that it has implemented the fresh restriction on transactions in coal, iron and iron ore from North Korea. It informed the North that it has reduced the number of staff at the North's diplomatic mission in its capital.

A ban was also inflicted on the export of helicopters and ships to the North, with restrictions imposed in the transport, financial, science and education sectors, it added.

Bulgaria also said that it has informed the North about restrictions "in the use of real estate property owned by the North" for any purpose other than diplomatic activities, and asked Pyongyang to take relevant measures.

"Bulgaria is concerned by the escalation of tensions on the Korean Peninsula and calls for a peaceful solution through diplomatic channels," it added. (Yonhap)