Gathering in front of the Bosingak Bell near Jongak Station, participants held up placards with slogans such as “End racial discrimination and hatred.”

Some said “Stop Trump” in reference to the US president’s anti-migrant rhetoric and policies. 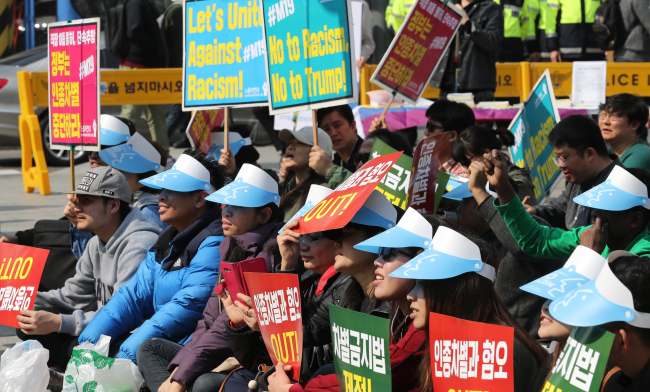 Foreign residents attend a rally to mark the International Day for the Elimination of Racial Discrimination in Seoul on Sunday. (Yonhap)

International Day for the Elimination of Racial Discrimination, officially March 21, is a UN-designated event that has been observed since 1966. But Udaya Rai, the president of the Seoul-Gyeonggi-Incheon Migrants’ Trade Union, said the situation was getting worse, despite such a long establishment.

“It has been 50 years since the UN declared the day for eliminating racial discrimination, but despite this, discrimination against migrant workers has got worse in Korean society,” he said.

“The Korean people should get a proper understanding of the realities of how migrant laborers are working.”

He called for the Employment Permit System to be replaced with a work permit system. The EPS is the system through which most non-Chinese migrant workers come to Korea, and limits workers’ rights to change workplaces and the length of time they can stay in Korea. Critics such as Rai say the system leaves workers vulnerable to abuse, among other dangers.

“I am a naturalized Korean, but Korean citizens do not treat me as a Korean person. This society cannot be seen as a multicultural one,” said Han Ga-eun of the Women Migrant’s Rights Center of Korea.

“Migrant women receive poor treatment both as women and as migrants, but the government’s policies only target us as (members of) multicultural families.

“A counseling center is urgently needed for migrant women who experience mistreatment, whatever visa they came in on.

“Migrants need to have their rights protected to allow them to live confidently and without discrimination, as human beings, in a safe society. An antidiscrimination law to eliminate racial discrimination is urgently needed.”

Surveys show that Korean attitudes to immigration are negative. A report released last year by the Ministry of Women and Family showed that support for multiculturalism did not rise above 60 percent even among people who had ethnic minority friends, neighbors, relatives or colleagues. More than 3 in 10 respondents said they would not want a foreign neighbor and 6 in 10 said they approved of discriminating against foreign workers when hiring.

The rally also marched through central Seoul from Bosingak to the National Human Rights Commission of Korea, chanting “End the Employment Permit System” and other slogans.