The Korean Education Center, a Ministry of Education-affiliated agency in charge of teaching Korean to overseas Koreans and foreigners, has opened its 40th offshore branch in Ukraine, the ministry said Friday.

Ukraine's Korean Education Center opened in the East European country's capital Kiev in a ceremony attended by education officials from both countries Friday, the ministry said. 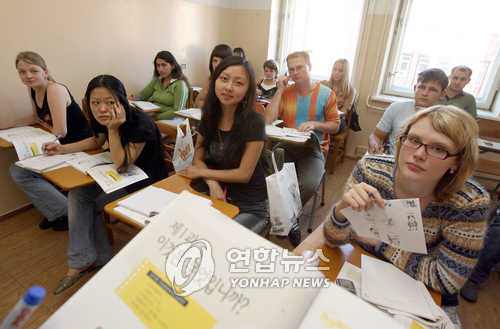 South Korea opened the first Korean Education Center in Japan in 1963 and has since established 39 more branches in 18 countries across the world.

In Ukraine, ethnic Koreans, mostly descendants of Korean emigrants to the former Soviet Union, had long asked for the establishment of a Korean language institute in Kiev.

South Korea and Ukraine celebrate the 25th anniversary of diplomatic ties this year.

In a related move, the two countries signed a memorandum of understanding on expanding bilateral cooperation in the education fields and sending Korean language teachers to Ukraine's schools.

"The Korean Education Center is expected to help expand awareness of South Korea and the Korean language among the people of Ukraine," said a ministry official. (Yonhap)