The diplomatic tensions between South Korea and China over the deployment of a US missile defense system hasn't affected Winter Games cooperation between the two sides, a senior Olympic official here said Wednesday.

Lee Hee-beom, president of the organizing committee for the 2018 PyeongChang Winter Games, said the South Korean host city and Beijing, which will stage the 2022 Winter Olympics, have remained cooperative despite the ongoing spat over the Terminal High Altitude Area Defense. Since South Korea agreed to host the system last year, China has denounced the move, saying its high-power radar will be used to spy on its military. 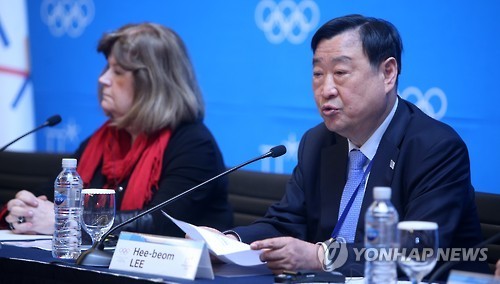 Lee Hee-beom (R), president of the organizing committee for the 2018 PyeongChang Winter Olympics, speaks during a press conference following meetings with the International Olympic Committee's Coordination Commission, chaired by Gunilla Lindberg (L), on March 15. (Yonhap)
On Lee's watch, PyeongChang and Beijing, along with Tokyo, host of the 2020 Summer Games, have formed a tripartite cooperative network. At a press conference following the meetings of the International Olympic Committee's Coordination Commission on PyeongChang, Lee said the diplomatic situation hasn't influenced the two's sports cooperation.

Lee noted that Beijing has sent "a large number of delegates to PyeongChang" during an ongoing series of Olympic test events, so that they could study Winter Games venues closely and learn more about organization and operations of winter sports events. Lee has previously spoken about using some of PyeongChang's Olympic venues as training facilities for those competing at the 2022 Beijing Olympics.

"The organizing committees of PyeongChang and Beijing are closely cooperating with each other," Lee added. "And discussions for further bilateral exchanges in the areas of sports and culture are ongoing. I believe many Chinese tourists will visit PyeongChang in 2018."

Aside from the THAAD row, PyeongChang has also had to deal with the political uncertainty at home, in light of the ouster of former President Park Geun-hye.

Gunilla Lindberg, head of the IOC's Coordination Commission, said she has been reassured by South Korean political leaders that parties will put aside their differences to fully support the PyeongChang Games. Lindberg has met with Acting President Hwang Kyo-ahn and National Assembly Speaker Chung Sye-kyun during her visit.

"All of them assured that independent of what's happening on the political side in Korea, they will fully support PyeongChang 2018," she said. "We have the assurance from the political side and we have trust in Korean politicians."

Lee pointed to the National Assembly's resolutions on PyeongChang, drafted late last year, as evidence of the political parties' willingness to back the first Winter Games in the country.

He also said stability will be restored following the presidential election on May 9.

"Under the new president, I believe we will have a more stable system in place," he said. "And I believe the PyeongChang Winter Olympics will unite our people again."

Lindberg said PyeongChang will have to "clarify" its transportation system and improve its accommodations, but added she's otherwise pleased with the host city's progress.

"I am pleased to report that fans and athletes from around the world can expect a unique Winter Olympic experience in PyeongChang," she said. "From the fans' point of view, the Olympics will be mixed with cultural activities. And athletes can expect top-quality venues and fields of play on both snow and ice."

Lindberg said the support of the South Korean public will be "very important" for the success of the Olympics, and it's crucial for PyeongChang's organizers to reach out and engage the people.

Lee admitted the organizing committee still has work to do to create more excitement about the Olympics, and Lindberg predicted the situation will improve soon once plans for the Olympic torch relay are finalized.

"The Olympic torch and the torchbearers' uniforms were unveiled last month, with the torchbearer selection process expected to be launched in the coming months," she said. "When the relay gets under way towards the end of 2017, this will undoubtedly bring excitement to the whole country." (Yonhap)