It’s an opportunity for Seoulites to hear some traditional Irish instruments and watch some dancing, and is a family friendly way of celebrating the day before evening celebrations in bars and pubs.

Performances at the event include traditional Irish music from Jigs and Reels and Ceoiltoiri Seoul, folk from Boss Hagwon and Scott Hildebrand, and Irish rock from Sweet Murphy’s Fancy. A Korean troupe specializing in Irish dancing, Tap Pung, will also be taking to the stage. 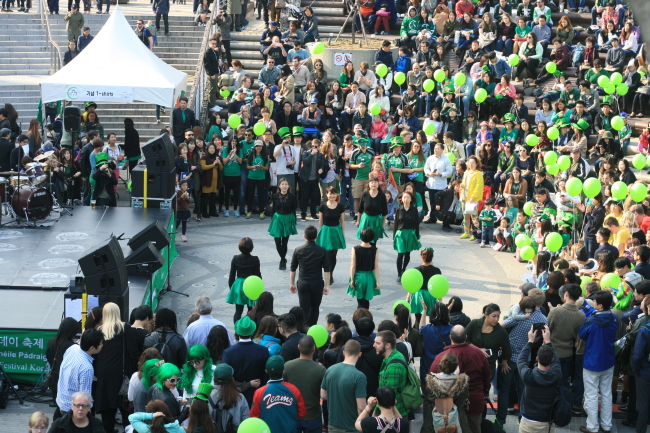 IAK Chair Andrew Kilbride said the event came with an open invitation to “come along and enjoy being Irish for the day.”

“For people from Ireland or those of Irish heritage, St. Patrick’s Day is a very important time to celebrate a culture familiar to them,” he said. “St. Patrick’s Day is also a chance for Koreans and those from the wider community to learn and experience something new and exciting.”

Family-orientated cultural activities include face painting with traditional Irish symbols, and demonstrations of Gaelic football by Seoul’s Gaelic Athletic Association team, the Seoul Gaels, which children can participate in.

A fancy dress competition based on the event’s “Visions of Ireland” theme will come with prizes for the best dressed adult and best child.

Prizes for other draws and competitions include return tickets to Ireland via Etihad.

The feast day of Ireland’s patron saint is the closest Ireland has to a national day and the festival is the biggest of the annual events the IAK holds to share Irish culture.

Thousands have attended each year since it was began in 2000. Previous celebrations were held in Hyehwa and central Seoul, but the amphitheater has been the main venue since 2012.

After the celebration in Sindorim, the St. Patrick’s Day festivities will continue with The Hooley, a party at the Rocky Mountain Tavern in Itaewon from 7 p.m. The Hooley is a fundraiser for IAK events, and will have live traditional and modern music. The entrance fee is 10,000 won.

The main St. Patrick’s Day festivities will begin at 1 p.m. and continue until 6 p.m. at D-Cube near Sindorim Station.