More than 80 middle and high schools have applied to use controversial state-authored history textbooks as supplementary materials in the new academic year, the education ministry said Monday.

The textbooks will be distributed to 33 middle schools, 49 high schools and one specialized school this month to be used as supplementary or reference material in and outside of the classroom, according to the ministry. The government also plans to send the texts to 28 state schools and 22 Korean schools overseas without receiving applications from them. 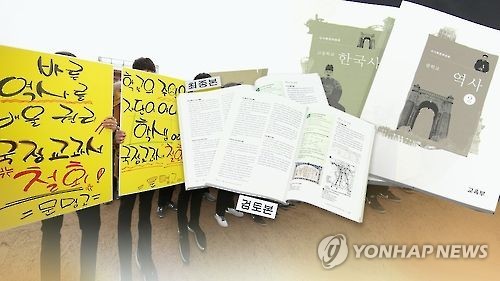 (Yonhap)
The decision is the latest development in an ongoing controversy over the books' rightist interpretation of events in the nation's modern history.

Last week, one high school in southeastern South Korea was forced to cancel its entrance ceremony for freshmen amid a standoff with students and parents over its designation as the only institution to test the textbooks this year ahead of its formal introduction next year.

The conservative Park Geun-hye administration revived state-authored history textbooks to correct what it viewed as a left-leaning, pro-North Korea bias in private publishers' textbooks. But liberals slammed the texts for glorifying the military regime of Park's father Park Chung-hee, who ruled the country for 18 years after a coup until he was assassinated in 1979.

In total, about 1.5 percent of middle and high schools in the country will use the new textbooks in some form this year, the ministry said. (Yonhap)