The exhibition focuses on the reinterpretation of household objects in art, and takes Duchamp‘s jokey 1917 “Fountain” as its starting point.

The 120 quirky and sometimes creepy exhibits are laid out in stark white spaces, identified as rooms of a home and labelled as entrance, living room, bathroom and others. 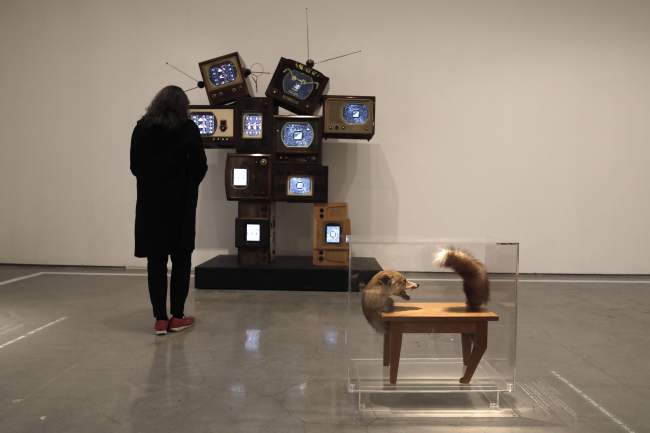 A woman looks at the “Allan and Allen” installation by Nam June Paik as she stands next to the “Wolf Table” installation by artist Victor Brauner at the living room section of the “No Place Like Home” exhibition in the Israel Museum in Jerusalem on Sunday. (AFP-Yonhap)
It evokes the layout and “home” settings of furniture superstores such as Ikea, one of the event’s sponsors.

“It‘s the first time that the subject has been treated in this way, from the time of Duchamp up to today,” said exhibition curator Adina Kamien-Kazhdan.

“Domestic objects transformed by the artists in many ways are gathered in a quasi-house, a strange sort of house within the Israel Museum,” she said.

It also marks the centenary of Duchamp’s piece of sanitary ware, considered an early example of the anarchic Dada movement.

Dadaism ran through the mid-1920s and used humor, wit and irony to highlight what some artists described as social and cultural decay in Europe in the wake of World War I.

Also in the Jerusalem exhibition are works by Franco-American artist Louise Bourgeois, pop-art star Andy Warhol and Japanese feminist Yayoi Kusama, creator of the penises waiting to be ironed.

Kamien-Kazhdan describes it as a protest against male domination.

“The artists evoke many contemporary problems through these everyday

objects: the allocation of tasks between the sexes at home, identity, sexuality, family and how we build our cultural identity through the house,” she said.

Of the 120 exhibits, 70 belong to the collection of the Israel Museum and the others have been lent by the London‘s Tate Gallery, MOMA in New York and the Centre Pompidou in Paris.

The exhibition is open until July 29. (AFP)