The contest run by Teach North Korean Refugees, a volunteer organization that helps refugees learn English, will focus this year on the theme “That Moment, My Escape From North Korea.”

TNKR founder Casey Lartigue said the “That Moment” concept was designed to give the speakers room for interpretation. 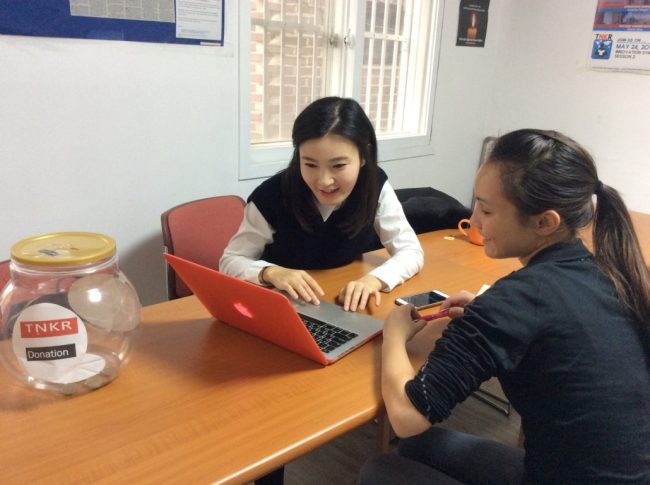 North Korean refugee Cherie Yang works on her script with a TNKR coach.(TNKR)
“We wanted a topic that they could all discuss but we wanted enough room that they wouldn’t all be telling the same story,” said, Lartigue. “So obviously some of them will be talking about escaping from North Korea, some of them will be talking about some of the key things that happened in North Korea, others (will) talk about China or their adjustment, but just one particular moment.”

TNKR provides one-on-one English instruction to defectors, and those entering the contest get individual help from two or three coaches each.

It is a format that Lartigue says not only helps speakers’ presentation skills, but also their confidence, encouraging them to be confident about making their own decisions as well.

He said the nature of having a competition helps sharpen the mind and create a sense of purpose. “So they focus on this contest and the coaches are pulling for them, so it’s not like they’re teachers, it’s more like they are partners helping them get ready for this contest.”

Before the contest, the refugees have to submit a presentation on what they want to speak about, which they do on their own. Then they are given a video of their competition speech, so they can see how they have improved.

Although they receive coaching, the format of the contest encourages them to take control, according to Lartigue.

But the refugees must write their own scripts and because each gets more than one coach, they sometimes get conflicting advice, leaving them to make the judgment.

“One refugee just came to me and said, ‘I don’t know what to do, my coaches don’t agree’ I said, ‘Great!’ It’s up to you. You’re the one that’s going to be on the stage, you’re the one who has to make the final decision.

“I can see them start to take charge and toward the end it’s clear that it’s their speech, and they are in control.”

Previous winners of the contest have gone on to various endeavors. Two have written books, another is studying in the UK, while one is an activist and another set up his own business.

As for the TNKR, Lartigue and his co-director have given up their main jobs to focus on the organization, but funding remains an issue.

The speech contest takes place from 2 p.m. at the Kim and Shin law firm near Myeong-dong Station in Seoul. Admission is 15,000 won. Visit teachnorthkoreanrefugees.org for reservations and more details.