“History’s Mysteries: The Missing Years of Gutenberg” is novel for English-language learners that follows two pairs of siblings from Korea and the US as they try to solve a mystery surrounding the German inventor.

The idea for the book came from two treasure hunts Van Hise set up, one in Daegu and one in Seoul. Inspired by David Blaine’s treasure hunt book, “Mysterious Stranger,” people would have to solve the clues to find a prize in the city.

In Seoul, three sets of complex clues led to three different keys to the same lock, hidden among those attached to railings on Namsan.

“Excitingly, two couples found two of the three keys. It took another three to four days before one of the couples finally secured the lock and was awarded the prize,” said Van Hise.

“I couldn’t have been more pleased to know it was a race to the finish.”

After that, Van Hise, thought there was an opportunity to create something similar for the English as a foreign language market.

“What if we could make an interactive book that led to a real treasure hidden somewhere?” he said.

“Our readers (students) would have to crack some fun English logic puzzles in order to find the treasure.” 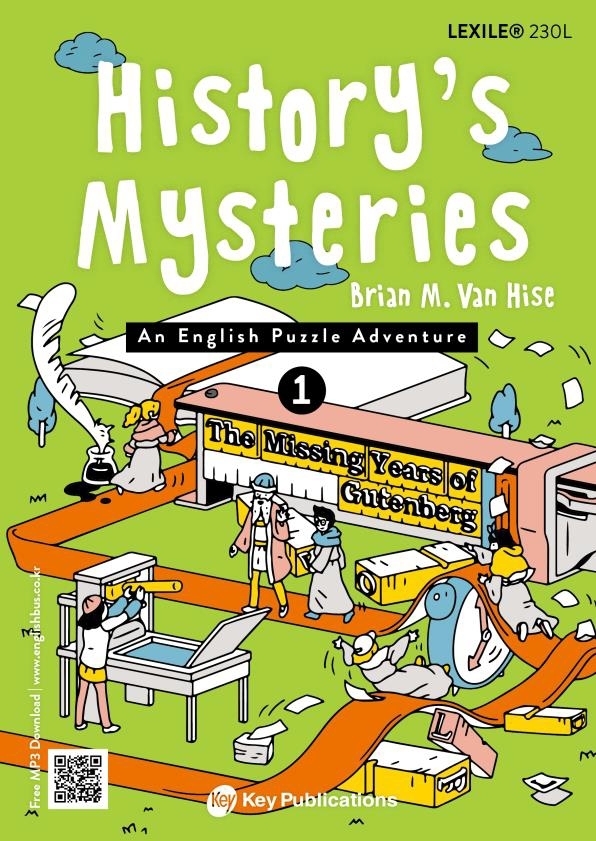 For business reasons -- a real life treasure hunt would limit opportunities for reprints -- this final book is a fair bit different from the original concept, and now combines some history learning along with English as a foreign language.

“My editor, Jeannie Park, was very interested in employing TPRS (teaching proficiency through reading and storytelling) techniques in the book.”

Each chapter of the novel starts by previewing a few keywords, then exercises that review these words crop up in the text as part of the story.

“Throughout the story, our readers are required to solve fun English word puzzles, which help propel the characters themselves through the tale,” said Van Hise.

“Our goal was to promote fluency and readability. We don’t want our readers to feel too much like students when they pick up the book.”

There are also some craft activities that readers might do with adults.

The book is aimed at middle schoolers, though Van Hise admits his initial draft was too challenging in terms of English level.

He said he addressed this by switching from writing on the computer to writing the book by hand “which forced me to slow down my thoughts and create simple, noncompound sentences. Again, we want our readers to have no difficulty with the text.”

The book is available from major offline and online retailers.

Van Hise has already completed the second book in the History’s Mysteries series, “The Shoulders of Giants,” in which the characters travel back to 1990 and help Tim Berners-Lee invent the World Wide Web.

He expects it to be available later this year.