A South Korean ship with 24 crew members and some 5,000 cars was released Tuesday after being seized by the Libyan military last week, Seoul‘s foreign ministry said.

The ministry said that the ship, Morning Compass, which was travelling to reach its final destination of Germany, was captured by the Libyan Navy some 1,400 kilometers east of Misurata in the North African state’s northwest region at 5 p.m. on Saturday. 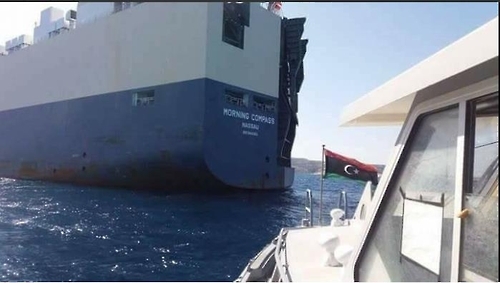 This photo is captured from a Libyan news outlet site by Yonhap News Agency.
The ship was set free at 7:54 a.m., Tuesday (Libyan time), and is now sailing “normally,” the ministry said.

The crew included 12 Filipinos, 10 Bulgarians and two Ukrainians. No South Korean sailor was aboard the ship, the ministry said. The ship is carrying some 3,500 new cars and 1,500 secondhand vehicles. (Yonhap)