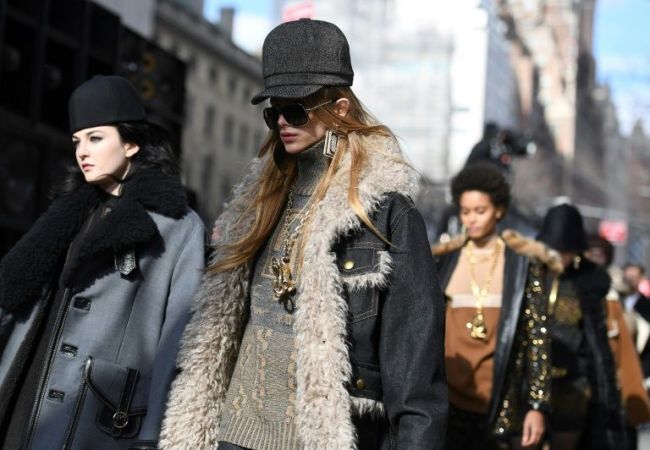 One of America’s most critically acclaimed living designers sent models down a bare wooden catwalk in silence, striding through the middle of a cavernous room devoid of decoration and empty but for a long line of seated spectators.

In a break with the usual flash-mob frenzy straining to capture every move on cell phones, guests were kindly asked to refrain from taking pictures.

The layout gave an audience of around 300 each -- in two back-to-back shows -- a front-row seat on utilitarian fold-out chairs.

With no music, the only sound was the thud of models prowling the scuffed wooden floor.

Only when they exited the building onto Park Avenue could press photographers record the action as models took their own seats, ready to turn phones onto the guests as they poured outside.

The music -- so ubiquitous at fashion shows -- blared out of loudspeakers as guests and models found themselves in a mobile phone face-off on a bitterly cold February afternoon.

Guest of honor Katy Perry, the most popular person on Twitter with 96 million followers, snapped away with other lesser mortals -- the commentary on celebrity-obsession as deliberate as it was unsubtle.

Jacobs called his collection a “representation of the well-studied dressing up of casual sportswear” and hip-hop the foundation of youth, street culture.

Belted coats fell mid-thigh and were paired with short skirts and dresses.

There were baggy track-style pants that trailed even chunky platforms.

Standouts included pumped up hats that evoked hip-hop style, heavy gold jewelry and a handbag worn round the neck on another chunky chain.

“This feels like a time to rethink not only what we say but how we say it,” Jacobs told Women’s Wear Daily, suggesting that people immerse themselves in the live experience of a fashion show much like going to the theater.

“It does feel that, in this moment, people pay much more attention to who one’s showing on than what one’s showing. You know, whether it’s the Kendalls or the Gigis,” he said of celebrity models Kendall Jenner and Gigi Hadid.

New York saw an increasing number of designers question the relevancy of the runway -- especially considering the cost of wildly expensive catwalk displays -- as the industry moves towards a more see-now, buy-now model, and designers have more options to communicate.

For the first time in his 15-year career, Zac Posen instead did an exhibition of photographs showing just five models wearing a capsule collection.

“I love the theatrics of the runway but I think right now it’s a different time, for me at least,” he told AFP.

“I like that you can stand in front of an image and have a conversation about what we’re seeing. At a runway show, there‘s no talk. Fashion and beauty is about dialogue,” he added.

Vera Wang also ditched the catwalk in favor of a video that will coincide with the start of Paris fashion week.

“Probably we will, but maybe in a very different format,” she told Women’s Wear Daily when asked whether she would return to the schedule in spring.

“The calendar is so full now that it‘s insane to try to get models and hair and makeup. It’s a battle royale for everybody.” (AFP)