"Obviously North Korea is a big, big problem and we will deal with that very strongly," Trump said during a joint news conference at the White House with Canadian Prime Minister Justin Trudeau in response to a question about the most important national security matters facing him. 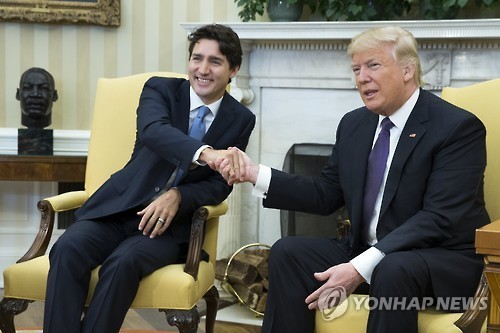 (Yonhap)
Trump did not elaborate on specific strategies to deal with Pyongyang.

After summit talks with Japanese Prime Minister Shinzo Abe on Friday, Trump said that defending against the North's nuclear and missile threat is "a very very high priority" for him.

Trump also held a late night joint press conference with Abe on Saturday, just hours after the North's missile launch, to reaffirm the US commitment to defending the ally in the face of North Korean threats, though he stopped short of directly condemning the launch.

The North's missile launch marked the first provocative act by Pyongyang since the inauguration of US President Donald Trump.

The launch came after North Korean leader Kim Jong-un threatened to test-fire an intercontinental ballistic missile apparently capable of reaching the US.

Experts said the latest firing could be aimed in part at testing how the Trump administration would react to a missile launch before the regime goes ahead with a full-fledged ICBM test that Trump has pledged to prevent from happening.

On Monday, the North said the launch represented a successful test of a newly developed intermediate-range missile powered by solid fuel. Weapons experts say solid-fuel missiles pose greater threats as they require less preparation time than liquid-fueled rockets, and can be fired from mobile launchers easy to move around. (Yonhap)