UN Secretary-General Antonio Guterres on Monday denounced North Korea's latest ballistic missile launch as a violation of Security Council resolutions and urged the regime to abide by its international obligations.

"The secretary-general strongly condemns the launch of another ballistic missile by the Democratic People's Republic of Korea on 12 February," Farhan Haq, deputy UN spokesman, said in a statement. "This action is a further troubling violation of Security Council resolutions." 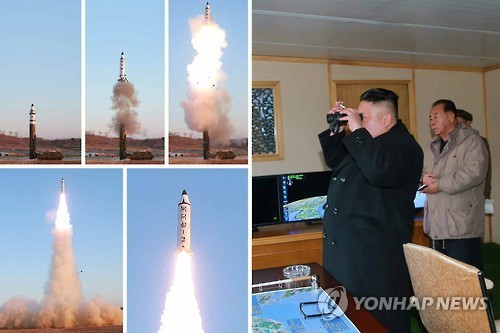 In this photo taken on Feb. 12, 2017, North Korean leader Kim Jong-un (R) observes the test-firing of a Pukguksong-2 missile through binoculars. (For Use Only in the Republic of Korea. No Redistribution) (Yonhap)
"The DPRK leadership must return to full compliance with its international obligations and to the path of denuclearization. The secretary-general appeals to the international community to continue to address this situation in a united manner," the spokesman said.

The Security Council was to hold an emergency meeting later Monday to discuss the North's launch. After the meeting, the council president, Ukraine's UN ambassador Vladimir Yelchenko, is expected to issue a press statement condemning the launch and urging Pyongyang to refrain from further provocative actions.

The North carried out the missile launch on Sunday morning local time in the first provocative act by Pyongyang since the inauguration of US President Donald Trump. The launch came after North Korean leader Kim Jong-un threatened to test-fire an intercontinental ballistic missile apparently capable of reaching the US.

Experts said the latest firing could be aimed in part at testing how the Trump administration would react to a missile launch before the regime goes ahead with a full-fledged ICBM test that Trump has pledged to prevent from happening.

On Monday, the North said the launch represented a successful test of a newly developed intermediate-range missile powered by solid fuel. Weapons experts say solid-fuel missiles pose greater threats as they require less preparation time than liquid-fueled rockets, and can be fired from mobile launchers easy to move around. (Yonhap)