NEW YORK (AP) -- Crunchy snow and ice greeted designers, models and fans at New York Fashion Week on Friday, a day after a snowstorm pummeled the city. What visitors got was a high-profile debut and a political message at Calvin Klein, some psychedelic designs (and more politics) from Jeremy Scott, a focus on femininity from Jason Wu, and not one but two collections by Kate Spade.

Among the day’s highlights: 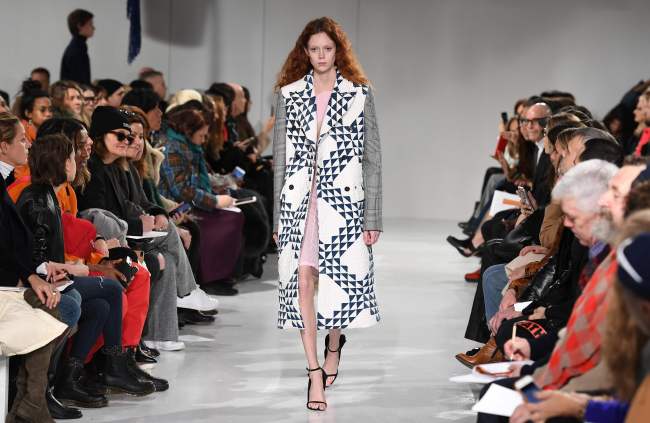 A model walks the runway for the Calvin Klein show at New York Fashion Week on Friday. AFP-Yonhap
Calvin Klein: Message from runway

The message could not have been clearer or more pointed: Raf Simons’ debut collection for Calvin Klein opened and closed with the David Bowie song “This is Not America.”

“When you have a voice, you should use it,” Simons said backstage just last week at his own label’s menswear show. And now, for his much-awaited bow Friday morning with new employer Calvin Klein -- for which he has moved to New York -- the Belgian designer was using his.

The soundtrack wasn’t the only means Simons used to put across his message. A day earlier, Calvin Klein had sent guests patterned bandanas, with a note saying: “Unity, inclusion, hope and acceptance: Join us at Calvin Klein in wearing the white bandanna. #tiedtogether.”

The clothes, too -- designed along with the label’s Pieter Mulier -- were meant to display an inclusive message, sort of a melting pot of styles. “It reflects the environment,” Simons wrote in the show notes. “It is the coming together of different characters and different individuals -- just like America itself.”

There were nods to the American West for both women and men, with denim jackets over loose jeans, or colorful cowboy-style shirts. There was sporty America, in striped tube-sock sleeves -- similar to the arm-warmers shown by his men’s label. There were crisp business-like suits in black and white, and coats in colorful quilt patterns.

For some flash, there were a number of garments -- dresses, coats, skirts -- encased in a layer of plastic, looking like cellophane wrapping on a gift. In one dress, the plastic shielded a burst of feathers in white, yellow and black. A golden yellow furry coat also had this laminated effect. Another common embellishment was a silver metallic flower, appearing on black leather jackets or sheer mesh tops that left little to the imagination. 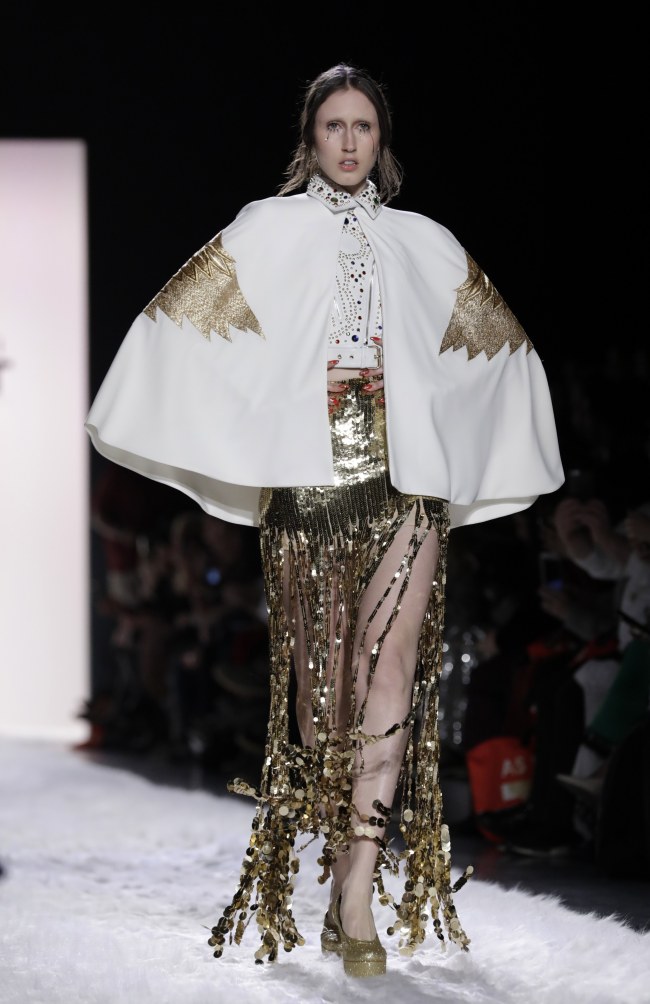 A model presents a creation by Jeremy Scott at the New York Fashion Week on Friday. EPA-Yonhap
Jeremy Scott riffs on iconography, politics

There were Jesus portraits on velvet. Sequined Cleopatra-style headdresses. A white feathered tiara several feet high. A baby doll nightie saying “Love Stinks.” A tearful Marilyn Monroe face. Sparkling gold go-go boots. A guy in a kilt AND ripped jeans. Another guy draped in a stole that looked like a toy fox.

Backstage before the show in a packed West Village venue, Scott said he had been thinking about iconography and politics.

“I was thinking about how Elvis and Marilyn and Michael Jackson and Jesus are all kind of worshipped on the same altar,” Scott said. “And that’s kind of how we’ve gotten ourselves into a situation of having an entertainer for president. ... And then of course, at the same time (I was) trying to make fun clothes that I love and that I think my friends and fans will love.”

He said was going for an effect of “‘60s boudoirs mixed with streetwear elements like hoodies and T-shirts and sweatshirts ... collaged in a way like they’ve been sawed in half and smashed into one.” 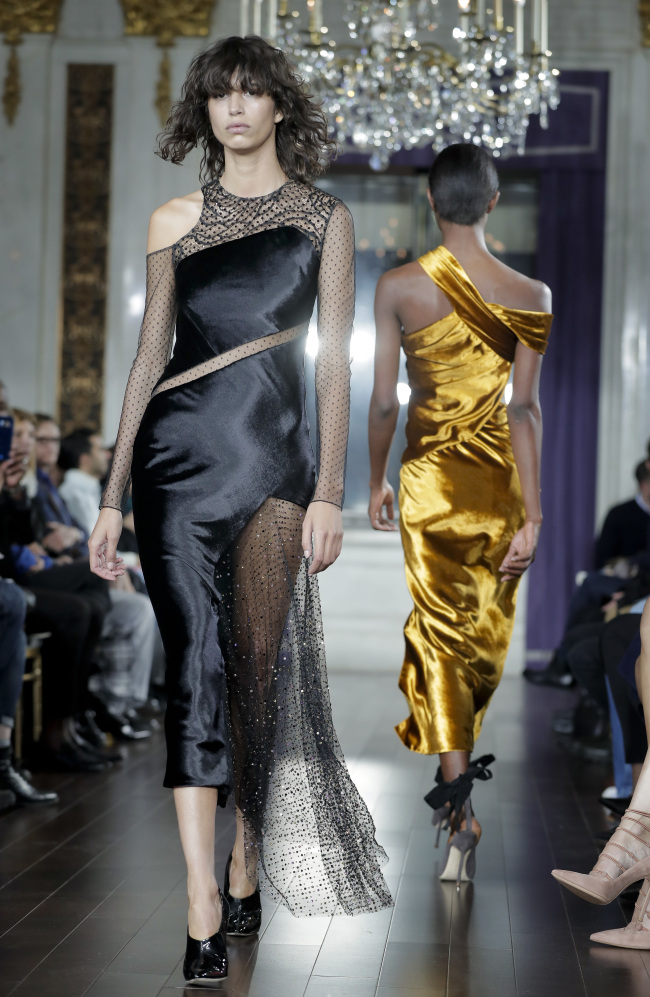 It was back in 2009 that Jason Wu vaulted to prominence as the chosen designer of Michelle Obama’s first inaugural gown. For good measure, he repeated the feat four years later.

This year, he’s celebrating the 10th anniversary of his label, and he marked the occasion Friday with a display of wearable, elegant designs at the St. Regis Hotel that showed his talent for turning out pretty yet unfussy clothes.

The collection was focused on “the luxurious femininity at the core of the house,” Wu said in the show notes. It featured soft suits and flowing dresses in fabrics like velvet, tulle, and chiffon. A shoulder-baring dress and a billowing top were both fashioned of a black gauzy material dotted with pale green velvet. Colors ranged from “lipstick reds” to “amber golds” to “juniper greens.” Accents included grommets and pearls. Printed chiffons were embellished with what the label said were “thousands of crystals, blurring the line between fantasy and reality.”