South Korea's trade minister said Monday that he will visit the United States soon to seek better ways to expand understanding and bilateral cooperation with the new Donald Trump administration.

In his inauguration speech on Friday, Trump stressed his "America First" doctrine again, saying that his every decision on trade, taxes and foreign affairs will be made to benefit Americans. 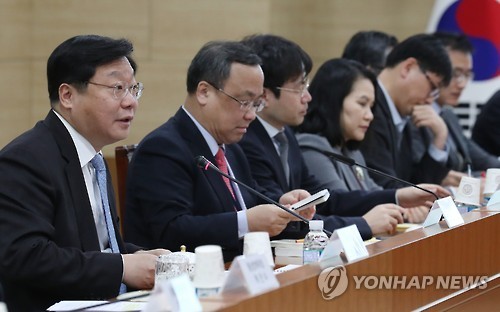 "When the US trade minister is approved and his trade policies are materialized, I will go to the US at an appropriate time and meet with officials there," he said in a brief meeting with reporters.

"I will seek win-win solutions for the two countries through strengthening cooperation in the energy and infrastructure sectors."

Joo also expected that Trump's America First policies will boost the world's largest economy and stir up demand for infrastructure-building projects, and consequently, South Korean companies can make further inroads into the U.S.

Trump's constant remarks against free trade have been raising fears about a rise of trade protectionism throughout the world, targeting many free trade agreements including the North American Free Trade Agreement.

The FTA between the US and South Korea, whose economy largely depends on exports, may be on Trump's renegotiation list, as he has denounced the Seoul-Washington FTA, which took effect in 2012, as a job destroyer.

In a recent annual government-level meeting on discussing pending trade issues over the Korea-US FTA, the two sides did not mention any possibility of renegotiations. (Yonhap)