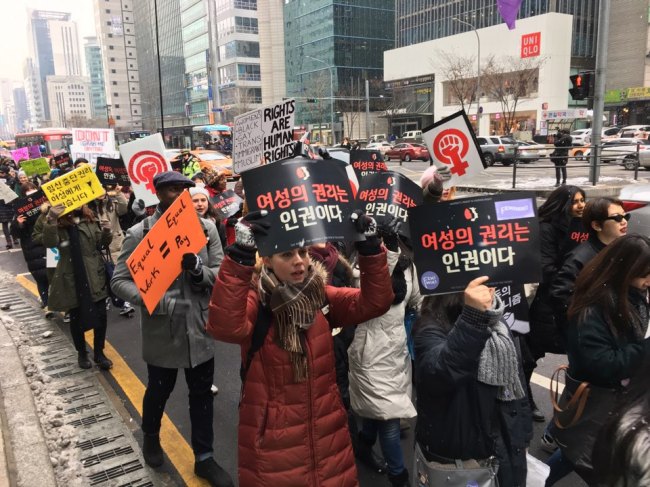 Protestors march across southern Seoul for Women's March against the US president Donald Trump on Saturday. (Ock Hyun-ju/The Koreal Herald)

Hundreds of men and women took to the streets of Seoul on Saturday for the Women’s March that swept through the US and elsewhere on the first day of Donald Trump’s presidency.

Braving the snow and subzero temperatures, an estimated 1,000 people, according to the rally organizers, marched for three hours through Gangnam, Seoul, joining the global grassroots campaign against the new US president who they believe has stirred up hatred, sexism and misogyny.
Displaying their concern over the Trump era, the participants carried placards and banners reading “Women’s rights are human rights,” and chanted “My body, my choice.” 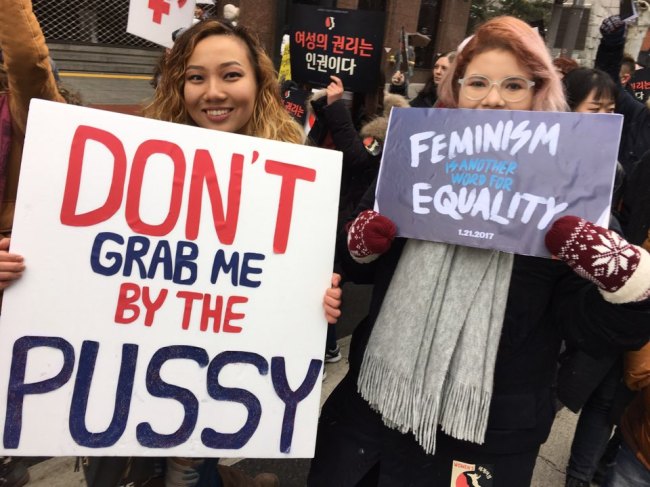 Amanda, 28, and Hong Sa-hee, 21, pose for a photo while marching across southern Seoul for Women's March against the US President Donald Trump on Saturday. (Ock Hyun-ju/The Korea Herald)

“The Women’s March started off as something against Donald Trump, but it is about the general well-being of women and minorities,” said Amanda, a 28-year-old US citizen who did not want her surname published. “I am extremely worried that Trump will pursue policies that are populist and against women. So it is important to let them know we are still here and we should be equal.”

A real estate mogul, TV personality and Republican politician, Trump has been widely criticized for degrading and objectifying women during his election campaign. A now-infamous 2005 video caught Trump bragging about trying to have sex with a married woman and kissing and groping others. 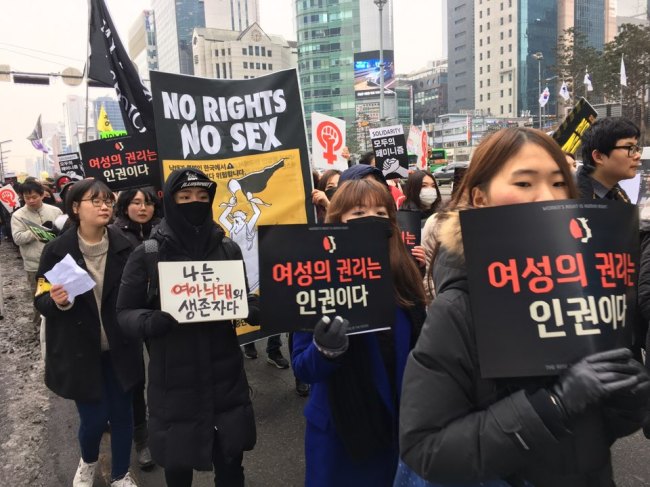 Protestors march across southern Seoul for Women's March against the US President Donald Trump on Saturday. (Ock Hyun-ju/The Korea Herald)

Adam Parton, an Australian who was one of the many male participants in the march, criticized Trump’s attitudes toward women, which he said made people think it was OK to degrade women.

“In a lot of ways, his administration has potential to send us backward from the direction we should be going,” he said. “Even after everything he said, he still became president. He is normalizing things that should not be normal.

The local march coincided with a massive protest held in Washington, where the controversial president was officially sworn in Friday, and elsewhere in the US and overseas. From Brazil to Kenya, from Saudi Arabia to Poland, more than 600 “sister” marches took place in 60 countries.

Tara, a US citizen who came with her husband and two children aged 5 and 10, said that she was worried about the future of her children.

“He has not presented himself with things I closely associated with -- diversity, equality, freedom, women’s rights -- which make America strong,” she said. “We wanted to be here to teach our children that acting on things and standing together make us stronger.”

While standing in solidarity with women around the world against Trump, local protesters also raised key domestic issues, ranging from the government’s ban on abortion to the sexual discrimination they said is prevalent in Korean society. 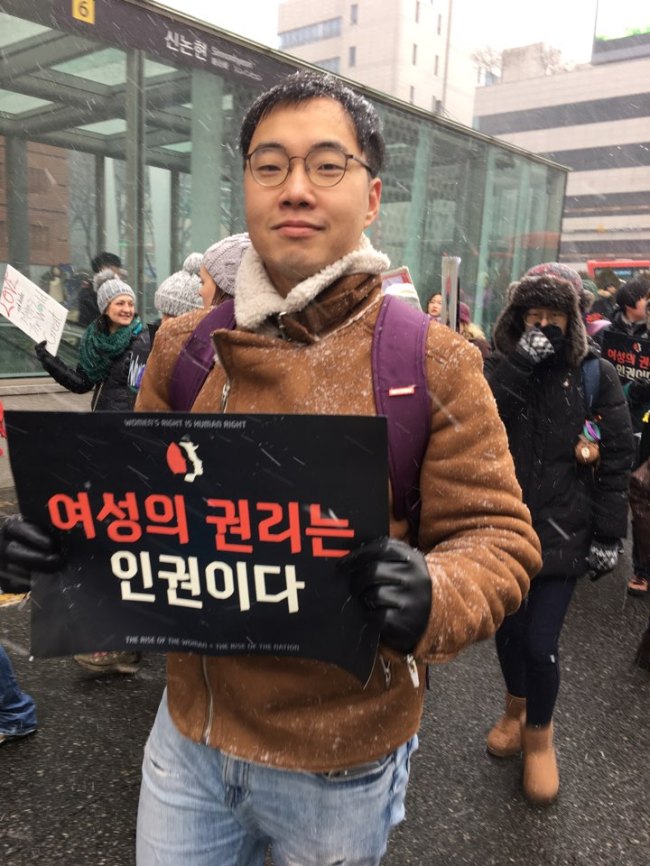 Kim Seong-kwan, 31, poses for a photo while marching across southern Seoul for Women's March against the US President Donald Trump on Saturday. (Ock Hyun-ju/The Korea Herald)
“I want my wife and my daughter to be respected as much as men are,” said Lee Seong-kwan, 33. “Prejudicial policies and discrimination are not only America’s problem.”

“I came here to raise my voice against misogyny and the patriarchal system in Korean society,” she said. “The inauguration of Trump as the US president has heightened the sense of crisis, especially because South Korea is influenced a lot by the US and especially because he has been elected on the back of slogans provoking division and discrimination.”