South Korea expressed "strong regret" over steps taken by Japan on Friday, including recalling its ambassador, in protest against a statue recently set up in front of its consulate office to shed light on its wartime atrocities of forcing women into sexual slavery.

"We express our strong regret over the action taken by Japan with regard to the statue," the foreign ministry said in a comment issued in the name of its spokesman.

"The government wants to make it clear again that both countries should keep advancing their bilateral ties based on trust regardless of any challenging issues," it added. 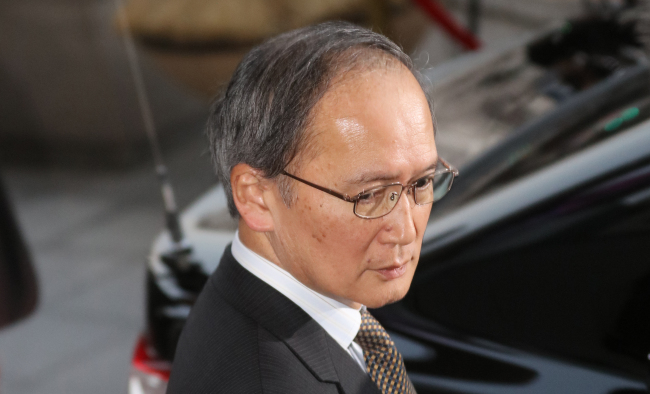 Japanese Ambassador to South Korea Yasumasa Nagamine leaves the South Korean Foreign Ministry in Seoul on Friday after being summoned by South Korean Foreign Minister Yun Byung-se in light of Tokyo's temporary recall of its top envoy to Seoul. (Yonhap)
Earlier, Japan decided to temporarily call in Yasumasa Nagamine, its ambassador to South Korea, in protest against the statue installed at the end of last year by a civic group in front of its Consulate General building in the southern port city of Busan. He will likely return to Japan next week.

Tokyo also announced a halt to the ongoing negotiation on a currency swap agreement between the two countries and the postponement of a high-level cooperation meeting.

In response, South Korean Foreign Minister Yun Byung-se brought in Japanese Amb. Nagamine later in the day to deliver his concerns and the government's stance on the issue.

In particular, the statue in Busan has become a diplomatic thorn between the two countries, as Tokyo has demanded its immediate removal. It is the second such statue installed in front of Japan's overseas diplomatic missions following the one set up before the Japanese Embassy in Seoul.

A local district office first rejected the civic group's request to place the statue, citing concerns that it could hamper transportation, but it changed its stance and allowed for its installment in the face of a strong public outcry.

Japan's wartime enslavement of women in front-line brothels has been a major source of a long-standing diplomatic rift between Seoul and Tokyo. Historians estimate that up to 200,000 women, mostly from Korea, were forced into sexual slavery for Japanese troops during the war.

In 2015, South Korea and Japan reached a deal in which Tokyo expressed apology and agreed to provide 1 billion yen (US$10.28

The decision was hailed by the international community as a step in the right direction given that the comfort women issue has been a long-standing obstacle to ties between the two neighboring countries.

Critics, however, demand the deal be scrapped, saying that the apology is not sincere and the government hurriedly agreed without seeking opinions from the victims.

Controversy is also lingering over Tokyo's push for the statue in front of its embassy in Seoul to be removed as part of the deal.

The Seoul government acknowledged that it promised to make efforts to produce a "proper resolution" on the matter but noted that it doesn't have any authority to remove the statue, which was built by a civic group. (Yonhap)