“In our policy directions this year, securing jobs is the most significant task,” Hwang said during the New Year’s policy briefing on economic affairs by the Ministry of Strategy and Finance, Ministry of Trade, Industry and Energy, Ministry of Land, Infrastructure and Transport, Fair Trade Commission and Financial Services Commission. 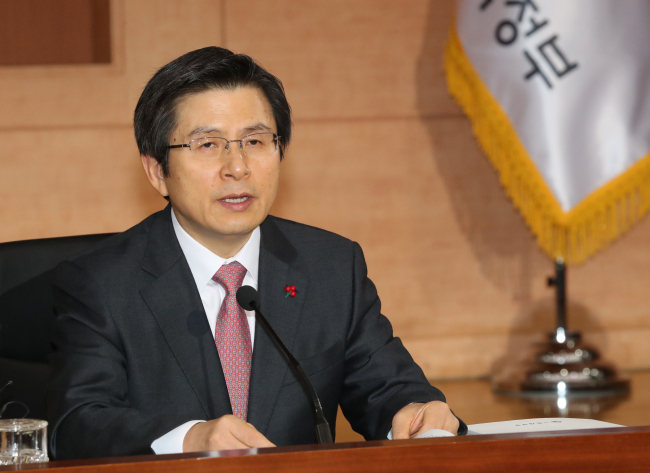 Acting President Hwang Gyo-ahn speaks at a policy briefing on economic affairs by the Ministry of Strategy and Finance and four other government agencies in Seoul, Thursday. (Yonhap)
“We should strive for economic recovery and job creation through aggressive fiscal spending, supporting venture firms, easing regulations and supporting young people and women who have difficulties finding jobs.”

According to the Finance Ministry’s policy plans, the government aims to spend more than 20 trillion won ($16.8 billion) in buttressing the economy and frontload 31 percent of the annual budget in the first quarter to counter downside risks.

To offer more jobs for youth, the ministry plans to add 1,000 more jobs at 321 state-run enterprises in the first half, while it plans 20,000 job openings in the public sector in 2017.

To stabilize egg prices and ease egg shortages sparked by the nationwide outbreak of bird flu, the government will suspend tariffs on egg imports until June 30. Previously, tariffs on egg products were 8 to 30 percent.

The Fair Trade Commission, for its part, seeks to adopt a strict regulation for consumer safety this year to prevent a massive consumer damage such as Oxy Reckitt Benckiser’s toxic humidifier sterilizer that was found to have killed at least 258 and perhaps over 1,000 users, reported since 2011.

If a product is deemed to have inflicted “serious damage” to a consumer’s life and physical body, the maker will face a fine of three times the compensation for damages, the FTC said.

The Trade Ministry plans to help reorganize industrial structures to put more focus on consumer goods and services to boost exports this year. Korean exports still heavily depend on manufacturing-based products such as machinery and steel.

Outbound shipments of Asia‘s fourth-largest economy slumped 5.9 percent to $495.6 billion last year, marking the first negative growth for two straight years in more than half a century due largely to a slowdown in global trade and a drop in oil prices.

The Financial Services Commission said it will focus on curbing the growth of massive household debt this year by expanding the debt service ratio, a gauge for an individual’s financial capabilities to borrow and repay loans.

While looking more closely into borrowers’ financial existing debt, the regulator decided to keep the debt-to-income ratio for households in the Seoul metropolitan area at the current 60 percent and the loan-to-value ratio at 70 percent for the third consecutive year since it was raised in August 2014.

For young entrepreneurs and some asset owners, however, the DTI regulation will be eased within the year, FSC Chairman Yim Jong-yong said.