Now some of the major works that the little corporal‘s armies took from Italy have been gathered together in an exhibition in Rome to mark the 200th anniversary of their restitution, and the unexpectedly positive legacy of the whole episode.

“When the works came back, it made people here realize the importance of their artistic heritage and, for the first time, they came to see it as a shared, common asset,” said museum director Mario De Simoni, ahead of the exhibition’s opening on Friday.

“The Universal Museum” runs until March 12 at the Scuderie del Quirinale, an exhibition space created in what were once the stables of the Quirinale, a former papal and royal palace that is now the official residence of Italy‘s president. 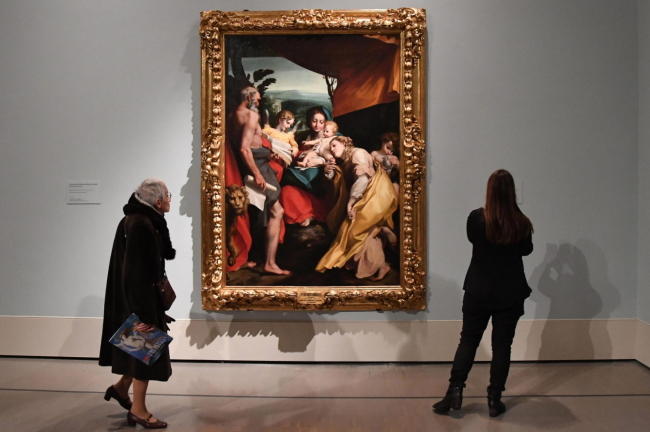 Visitors view a painting entitled “Madonna and child, an Angel and St Mary Magdalene and St Jerome (The Day)” by Federico Barocci on display at the “Museo Universale: Dal sogno di Napoleone a Canova,” exhibition at Quirinal Palace in Rome, on Thursday. EPA-Yonhap
Fittingly, the centerpiece of the exhibition of some 100 pieces is Raphael’s painting “Pope Leo X with Two Cardinals,” which is on loan from the Uffizi Gallery in Florence.

Also on display, along with a series of renaissance sculptures, is Titian‘s “Assumption of the Virgin,” which normally resides in the Basilica of Santa Maria Gloriosa dei Frari in Venice and was once hailed by Oscar Wilde as the finest painting in all of Italy.

“We wanted to tell the story of Napoleon’s great project of creating a museum that would be a model for Europe, distancing ourselves from the interpretation of this episode in history as nothing more than theft,” said curator Valter Curzio.

Napoleon assembled his Louvre-bound stash over the course of several military campaigns between 1796 and 1814.

Prior to becoming emperor himself in 1804, he was ordered by the revolutionary committee that ruled France from 1795-99 to make the country the dominant force in the Fine Arts, by making the Louvre home to a collection of the world‘s best creations in every form.

The success of his 1796-97 Italian campaign enabled Napoleon to exact an enormous tribute in the form of artworks from Pope Pio VI under the Treaty of Tolentina.

An 1811 decree ordered the transfer to the French crown of all paintings and artworks held in public buildings in Rome and around.

Five years later, after Napoleon’s political-military career ended with defeat in the Battle of Waterloo, most of the ‘borrowed’ artworks were sent back to Italy.

Many languished in storage until, years later, they were sought out as founding exhibits for what are now some of Italy‘s leading museums, including the Brera in Milan and the Gallerie dell’Accademia in Venice.

“What the Italians had initially seen as something damaging, was transformed, by the mystery of history, into awareness of this wonderful heritage that we are still enjoying to this day,” said De Simoni.

Among the works which remained in France were paintings by one of Raphael‘s teachers, Pietro Perugino.

Considered a less significant artist at the time than he is now, they were deemed unsuitable for the Louvre and sent to various provincial museums.

His “Marriage of the Virgin,” now considered one of his most important works, remains on display in the Museum of Fine Arts in Caen, northwestern France.