She knew, of course, that designers who are black like her existed. She used to snap up Willi Smith at The Limited growing up in Detroit. She headed to New York with high hopes.

“When I first came to New York my eyes were really opened to the breadth of the industry, but I was looking for our place in it,” recalled Reese, who has dressed first lady Michelle Obama.

Reese, along with other noted designers of color, Jeffrey Banks and Laura Smalls among them, spoke at the opening Tuesday of a new exhibition, “Black Fashion Designers,” at The Museum of the Fashion Institute of Technology.

Running through May 16, the show offers a glimpse into exactly how impactful designers of color have been through the decades, including Reese, Banks and Smalls. Smalls has seen her dresses worn seven times by the departing Obama.

They also know the challenges of striving for beauty in design while attempting to break through in an industry still dominated by whites.

“Designers of color don’t get a lot of publicity and so many of the businesses are not sizable. It’s tough to get recognition,” Reese said, standing amid rows of mannequins spanning decades of diverse black voices in fashion.

Reese’s father provided initial startup money when she first went into business for herself.

“I had to go out and get loans. I did a lot of paper writing. A lot of business planning. I had to have a lot of assistance because I didn’t have business training,” she said. “That’s usually what a banker wants to see, or a financial person. It’s a kind of closed industry. And as difficult as it is for a person of color, you really have to rise through the ranks high enough to grab the attention of the people who are holding the purse strings.” 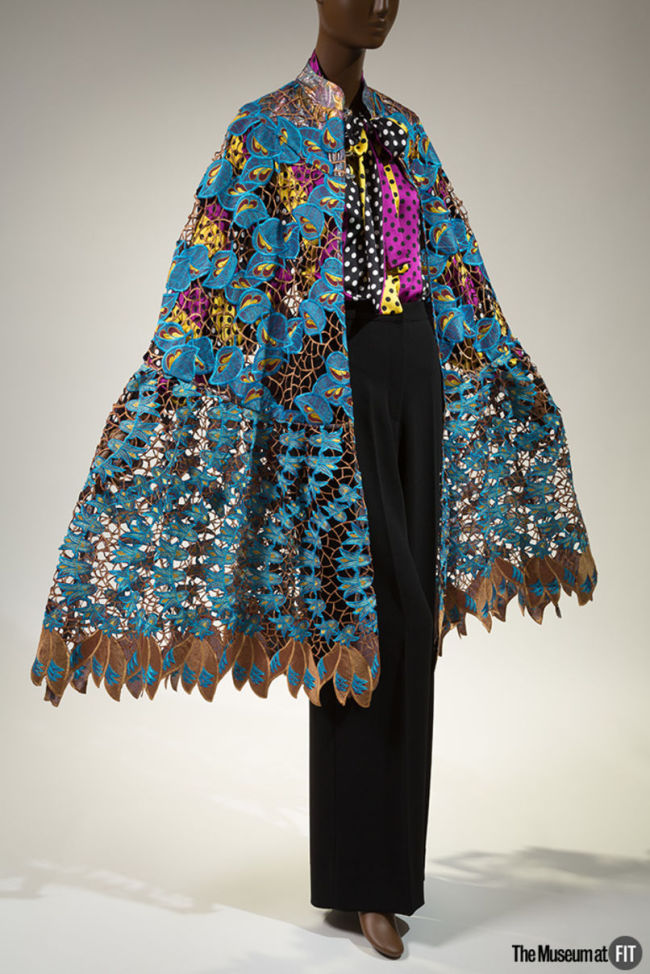 Duro Olowu, ensemble, Fall 2012, England. Gift of Duro Olowu, 2016.65.1. (Eileen Costa/The Museum at FIT)
Smalls, who grew up in Queens, knew at 8 or 9 that she wanted to be a fashion designer. She went to the High School of Art and Design, followed by Parsons School of Design.

“When I graduated Parsons, being African-American, it was not easy for me to get a job. It was just not easy. I couldn‘t fathom that I would be able to support myself with my own collection. They don’t say anything. I mean, you know. It’s just you don’t get the job. I could tell you a horrible story, but I won’t,” said Smalls, who worked in relative obscurity until 2012, when Obama first wore some of her pieces.

Banks, at 63 the oldest of the three, has focused on menswear over his decades in the business, adding home decor and childrenswear in more recent years selling on HSN.

“I was very lucky in that I met Ralph Lauren when I was 16. I started working for him when I was 17, three weeks out of high school and two months before I started college.”

Even so, it wasn’t easy.

“I remember when I was 10 years old and talking to a former nursery school teacher and telling her that I wanted to be a fashion designer and she said, ‘Well whoever heard of a black fashion designer,’ and she was black,” said Banks, who was raised in Washington, DC.

“I was so angry, even at 10 years old, to think why would someone say something like that? Why should that be an impediment to anything? I think it made me even more determined to become a designer,” he said.

Banks looked to those who came before him, but his eye was on the beauty of their creations, not necessarily their skin color.

“Growing up, Stephen Burrows, when I was in high school, he was just starting to design and I thought his designs were extraordinary, and that was way before I knew he was black,” Banks said. “I just thought they were great looking clothes. At the end of the day that’s really what counts.”

Jacqueline Bouvier must have thought so, too. In 1953, she wore an ivory silk taffeta gown to marry the young Sen. John F. Kennedy. It was designed by Ann Lowe, already a noted dressmaker for high society patrons in New York.

Lowe was also the great-granddaughter of an enslaved woman and an Alabama plantation owner. She learned to sew at the knees of her mother and grandmother.

“Yet she embraced all of the beauty of European couture,” said Andre Leon Talley, the former editor-at-large for Vogue who remains a fashion pundit and served on the show’s advisory committee.

The exhibition is intended as a sampling, not an all-consuming account of black contributions to fashion, but it does offer a wide range, from a modest ivory wedding gown by Lowe (not Jackie’s) to a risque royal blue satin Playboy bunny uniform by Zelda Wynn Valdes.

“The legacy is perseverance, and of struggling through many decades of culture,” Talley said. “Struggling black individualism. Struggling in a country that perhaps did not recognize black people as designers. You have a rainbow of success based on innate quality and innate technique. They had dreams, and they put their dreams into fashion.”