[ The Korea Herald – Send E-mail ]
Carolina Herrera says it's an honor to dress Melania Trump
By Korea Herald
Published : Dec 8, 2016 - 14:57
Updated : Dec 8, 2016 - 14:57
NEW YORK (AP) - While a few designers have made news saying they would not dress the future first lady, Carolina Herrera said she'd be honored if Melania Trump wore one of her outfits.

The famed designer spoke about Trump on the red carpet before she got an honor of her own Monday night from the Women’s Leadership Council at Lincoln Center.

Who might dress the wife of President-elect Donald Trump has become an issue after designers Sophie Theallet and Tom Ford, who have both dressed first lady Michelle Obama, said they wouldn‘t do so for Mrs. Trump, a former model.

But when asked if she would, Herrera said, "Of course I will, as the first lady of this country I will. Of course."

She added, "It is an honor to dress the first ladies of the country and it’s something to do for the United States. It's not for myself. It’s for the public."

Obama has worn Herrera while in the White House.

Herrera was lauded for her 35 years of fashions at the event by Emmy Rossum and Seth Meyers, among others. Diana Ross sang a mini-concert in Herrera's honor, including hits like "Ain’t No Mountain High Enough" and "I'm Coming Out." 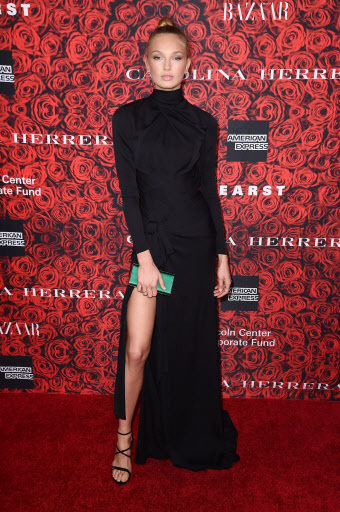 The "Shameless" actress said Herrera, whom she called "the chicest women alive," was the first to design for her on the red carpet, and over the years, helped her get out of her comfort zone.

"She persuaded me to embrace increasingly bolder and brighter prints," Rossum said. "She dared me to stand out."

Rossum said she excitedly called Herrera to design her gown for her upcoming wedding.

"I knew without question that only she could make the wedding dress of my dreams, and she has approached that task with the same care, elegance and enthusiasm that only she can," Rossum said. "I couldn’t be more honored at the thought of wearing her dress on my big day."

Meyers' wife also wore Herrera for their wedding. On the day, the late night comedian recalled how his wife came down with food poisoning and had to go to the hospital, but rallied for the ceremony.

"I was still concerned as to how she would look as she walked down the aisle, because I have to be honest, she did not look great in the hospital," he said to laughs. "It was problematic, because I put on the tuxedo, I looked fantastic."

But his fears were allayed when she put on her Herrera gown.

"I cannot tell you how much it meant to me and how in awe I was when my wife walked down the aisle after she had been lying on that gurney, on those fluids, and it was all such a credit to this Carolina Herrera wedding gown she was wearing," he said. "She was completely transformed."