His yellow dotted painting “12-V-70 #172” was sold for 6.32 billion won ($5.36 million) at Seoul Auction’s 20th Hong Kong Sale at the Grand Hyatt Hong Kong on Sunday. The painting garnered significant attention from buyers even before the auction opened over the weekend.

The bidding started at 4.5 billion won and eventually surpassed a previous record of 5.4 billion won, which was set by Kim in June with his 1972 painting “Untitled 27-VII-72 #228.”

The 1.73-by-2 meter piece, created in 1970, is a rare yellow color, whereas most of Kim’s dotted oil paintings boast a blue shade.

With this sale, Kim now holds the records for the five most expensive Korean paintings sold. 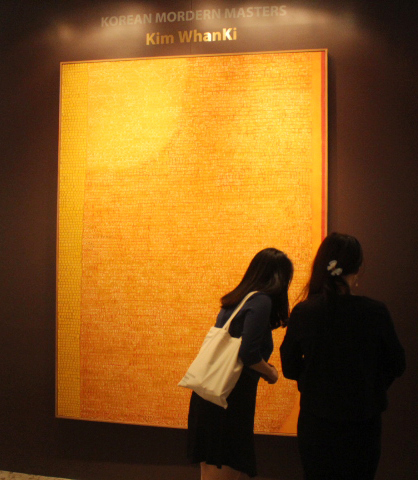 Yellow-dotted oil painting titled “12-V-70 #172,” by Korean abstract artist Kim Whan-ki sells for 6.32 billion won on Sunday, making it the most expensive South Korean art work ever sold. (Yonhap)
Kim, born in Korea in 1913, passed away in 1974 in New York. He led the first generation of Korean abstract artists, mixing oriental ideals and Korean Lyricism with abstraction. His artwork is largely characterized by different hues and patterns that fill the canvas.

A museum dedicated to Kim -- the Whanki Museum -- opened in Seoul in 1992. He is also distantly related to K-pop star T.O.P of boy band Big Bang.

The 142nd edition of the major Seoul Auction is set to take place on Dec. 14 at its headquarters in Pyeongchang-dong, Seoul.