A chorus of voices sans instrumental accompaniment will soon bring the transit system's rhythms to Broadway, the first time the famous theater district will host an a cappella show.

“In Transit” brings a rather unconventional touch to the Broadway stage: in a world known for its lively orchestras and consistent vibrato, the musical strips back the traditional extravagance to showcase the human voice.

“They sing, they dance, they act and they are the band,” said Kathleen Marshall, the acclaimed director and choreographer of the musical, which is currently in previews and will premiere Dec. 11.

A quartet of songwriters scored the show, including its co-creator Kristen Anderson-Lopez, who co-wrote songs for the animated hit movie “Frozen” -- including “Let it Go,” for which she and her husband won an Academy Award.

“A cappella is this incredible metaphor, because you have to be tuning in to the other people and you have to be listening,” she told the magazine Entertainment Weekly. “When we jump onto the subway we’re one place and we're going someplace else.

"Really life is all about being between stations. That’s what we‘re really trying to say with this piece."

More than 20 years ago "Avenue X" was the first musical to feature a cappella, but it was staged Off-Broadway -- a circuit typified by smaller venues, more experimental content and different financial stakes.

More recently the two "Pitch Perfect" films and the television series "Glee," which ran from 2009-2015, have helped bring the a cappella style back to the forefront.

More than a thousand a cappella groups boast a presence at universities across the US, and many participate in annual regional and national competitions. 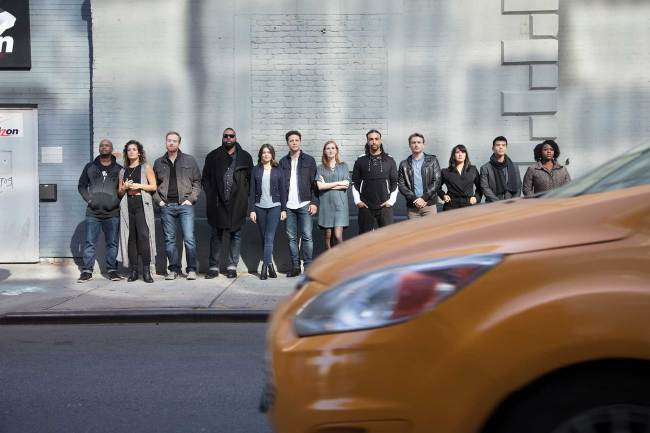 Promotional image for “In Transit,” Broadway‘s first a capella musical. (In Transit Broadway)
Bringing the genre to Broadway seemed a natural next step.

"In Transit," which has been in the works since 1999 -- and had a stint Off-Broadway in 2010 -- details the intertwined lives of 11 New Yorkers navigating the city’s chaotic streets and tunnels.

"It's about people finding themselves or trying to get to that place in life where they say: 'Yes, I'm here, I made it somewhere,’" said James Snyder, who plays Nate, a young man who has lost his job in finance.

"I think that's something relatable whether you live in a small town or in a big city like New York."

The actors had to modify their vocals to pull off the show’s harmonies, working under the direction of a cappella guru Deke Sharon.

"This type of singing is different from a regular Broadway sound," said David Abeles, who plays the character Dave.

He explained that the performers sing in a straight tone to blend their voices, thereby evoking more instrumental sounds.

"Sometimes Deke would have us miming the instrument that we‘re supposed to be playing," he said. "This actually helps because you visualize the sound."

The vocal orchestration of "In Transit" replicates the shouts of harried passengers, the whooshing sound the subway makes as it approaches and the low rumbling of the trains shuttling across the labyrinthian underbelly and elevated platforms of the city.

In a musical focused on commuting, Abeles said the core message is about savoring the journey.

"About lives in New York, about living in the moment -- rather than at the destination you’re going for."