The president has selected Yoo Yeong-ha, a 55-year-old private attorney, to counter a growing list of allegations that she may have helped her confidante, Choi Soon-sil, create slush funds with corporate donations and meddle in state affairs.

Despite the prosecution’s call for the interview to be held no later than Wednesday, Yoo was adamant that it was “physically impossible” because he was hired Monday and needed more time to prepare.

He also took issue with the prosecution’s unprecedented plan to quiz a sitting leader face-to-face, saying a written query was “appropriate in principle” but if a head-to-head meeting is necessary, it could be done in minimal time. 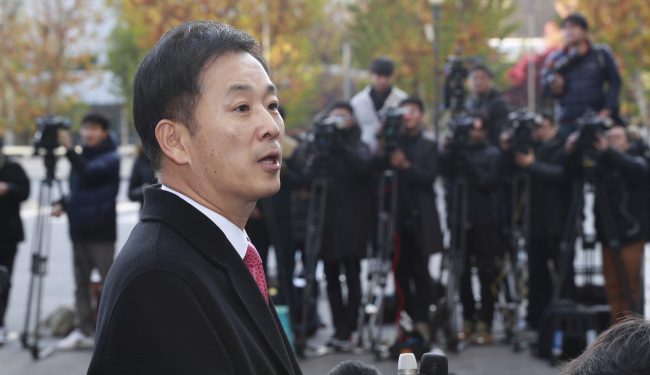 Yoo Yeong-ha
“A probe into the president should be carried out in a way that minimizes any burden on the performance of her duties, which I believe is in line with the spirit of the Constitution,” Yoo told reporters.

“It is reasonable for the probe to take place after (the prosecution) completes establishing factual grounds after looking into all allegations.”

A special prosecutors’ team in charge of the scandal confirmed that Yoo has requested more time for a review upon his submission of a letter of designation, offering to postpone the interview to Thursday.

“Given the probe’s substantial progress so far, we believe a face-to-face session is a must to find out the truth,” the team said in a statement after the attorney’s news conference.

The Constitution’s exemption of the president from being prosecuted had fueled debate over whether she should be grilled. But Park has displayed her willingness to speak in person with the investigators, including those of an independent special prosecution to be arranged by the National Assembly.

With Choi’s arrest warrant due to expire Sunday, the investigators said they plan to prosecute her later this week alongside former presidential secretaries An Chong-bum and Jeong Ho-seong, who have also been arrested on charges of abuse of authority, interference with a right and attempted coercion, and leaking state secrets, respectively.

But following a 16-hour inquiry, the team dismissed two other close aides, Ahn Bong-geun and Lee Jae-man, saying it has not “caught suspicions.”

Yoo’s ties with the president dated back to 2005 when Park, as chief of the then ruling Grand National Party, tapped him to be a deputy chief of its strategic planning committee.

He has since been working as her legal adviser, joining her first, unsuccessful presidential campaign in 2007 and her successful run in 2012. After Park’s swearing in, he was made a partner of a law firm run by her sister-in-law, Seo Hyang-hee, before being named by the ruling party as a member of the standing committee of the National Human Rights Commission.

In terms of the prosecutorial career, he passed the bar exam in 1992 and served at district prosecutors’ offices in Seoul, Incheon, Cheongju, North Chungcheong Province and Changwon, South Gyeongsang Province. He then pursued a foray into politics, running for the general elections in 2004, 2008 and 2012, all of which he did not win despite Park’s support.

Yoo appears to be a reasonable pick for Park given his experience in defending allegations about her relationship with the Choi family, which the opposition and other critics brought up during her previous election campaigns.

Yet he often emerged as a source of contention. An opposition lawmaker has claimed that Yoo received entertainment from the owner of a night club during his days as a district prosecutor in Incheon, while playing a role in diluting a stock price-rigging scandal engulfing then leading presidential contender Lee Myung-bak months ahead of a vote.

Around the 2012 presidential election, Yoo also posted other controversial comments on his Twitter account and even cursed Park’s critics such as renowned novelists Lee Oi-su and Gong Ji-young.