[ The Korea Herald – Send E-mail ]
Korea braces for market chaos after Trump win
Emergency meetings convened to discuss looming changes in US economic policies toward protectionism
By Korea Herald
Published : Nov 9, 2016 - 20:25
Updated : Nov 10, 2016 - 13:17
South Korean economic and financial chiefs on Wednesday convened emergency meetings and vowed to brace for the inevitable chaos in the nation’s financial markets after the surprise victory of Donald Trump in the US presidential election.

They also pledged to closely monitor and prepare measures against sudden and rapid changes in the economic policies of Korea’s second-largest national trading partner under the new leader. 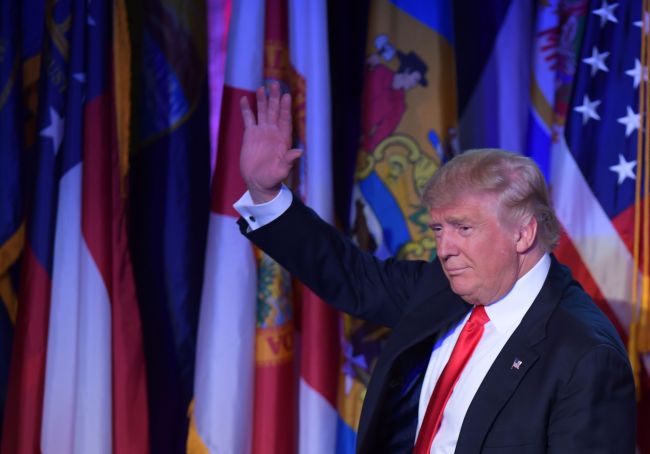 “The financial authorities will secure liquidity in the foreign exchange market, most of all,” Yim said. “The Korean economy and financial system may take a significant blow from the latest shock combined with the remaining risks from Europe and China. If the market volatility turns out to be excessive, the authorities will implement contingency plans to stabilize the market.”

As voting results in the US showed the Republican candidate in the lead earlier in the day, the stock markets in Korea crashed in panic.

Seoul’s main bourse Kospi closed at 1,958.38 at 3:30 p.m., losing 2.25 percent from the previous trading session. It opened higher than Tuesday in the morning, but began tumbling around 11 a.m. as Trump began to take swing states.

The tech-heavy Kosdaq, where investors bet on riskier equities, finished at 599.73, down 3.92 percent from a day earlier.

The index crashed below the 600 mark just after noon when Trump’s victory over Hillary became clearer, with a projected 80 percent chance of winning the presidency. It was the first time the market index had broken the barrier since Feb. 12.

Gold surged the most since the Brexit vote in June as traders flocked back into haven assets on reports showing surprise victories for Trump in states critical to his White House hopes. Bullion jumped to around $1,336.70 per ounce upon the rising possibility of Trump prevailing over Clinton, along with other havens including the yen. Oil and equities, meanwhile, tumbled. According to Korea Exchange, a total of 118.3 kilograms of gold were transacted in its gold exchange on Wednesday, the largest volume since June 10. Due to the weakened won, the gold price here soared 4.1 percent to 48,930 won per gram.

The won-dollar rate may rise to 1,200 won, a source in the foreign exchange market said.

“The victory of Trump itself is a factor elevating policy risks,” said Oh Seung-hoon, researcher at Daishin Securities. “Rapid falls will continue for about a month not only in Korea.”

A report by Eugene Investment & Securities said that the election of Trump poses a high possibility of Korean stocks plunging as investors avoid risky equities due to uncertainties regarding his polices.

“In the mid- and long-run, the new Trump government may block the Kospi from escaping the ‘boxpi’ as the two countries might face intensifying trade conflicts.”

The Bank of Korea also held a meeting on its own in order to get ready for a cautious watch on the market volatilities.

The probability of the Federal Reserve raising its fund rates in December has become lower with the Trump’s victory, market analysts here say, which makes the Korean central bank’s decision to hold its key rate in the upcoming Friday monetary policy meeting much more complex.

Korea has also been anxious over possible changes in the US trade policy under the new Republican president who spoke loudly about the growing deficit of the US in free trade with Korea. Trump has been in strong opposition against the Trans-Pacific Partnership and other Free Trade Agreements including the NAFTA and Korea-US FTA.

Yoo Il-ho, incumbent deputy prime minister for the economy, expressed concerns about stronger protectionist measures and increasing pressures on major trading partners by the US under the Trump leadership.

“The government will monitor changes in US trade policies cautiously, while preparing measures for any change in the Korea-US FTA and in the progress of the US parliamentary approving the Trans-Pacific Partnership,” he said at an earlier meeting on overseas economic conditions on Wednesday.

Trump’s triumph had been less expected by investors and even the government here until the vote counts started to tilt Trump’s way.

Lee Chan-woo, deputy minister of the Finance Ministry had said after a morning meeting on macroeconomics and financial markets: “Financial markets are seemingly moving toward Clinton’s win as I checked the foreign exchange and stock markets as of now.”

“If the opposite happens, we will have to meet again in the afternoon,” he said.

Markets around the world, including those of the US, Germany and France, also closed higher Tuesday over dominant forecasts for Clinton’s victory.

Credit Suisse had said in a recent report that a Clinton win would boost US markets by 7 percent, while the opposite result would shed 5 to 10 percent.