The essence of architecture, however, lies in allowing the structures to blend in with the surrounding nature and helping people freely enjoy the space with each other, said Kazuyo Sejima, a Pritzker Architecture Prize-winning architect. 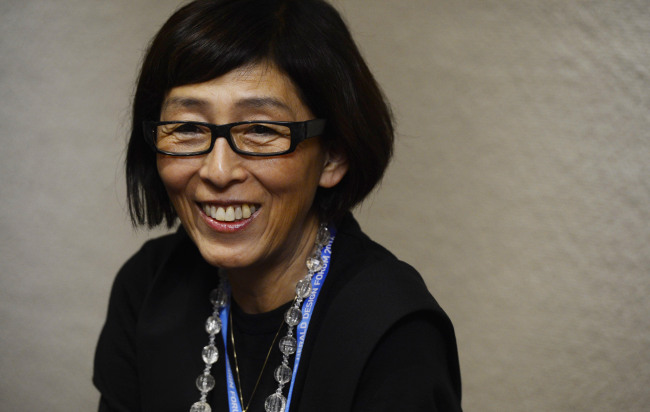 Pritzker Award-winning architect Kazuyo Sejima. (Park Hae-mook/The Korea Herald)
Speaking at the 6th Herald Design Forum held Tuesday at the Grand Hyatt Seoul, the Japanese architect shared her experiences of the past decade with the audience of some 800 people.

Sejima, only the second woman to receive the highest honor in architecture -- after the late Zaha Hadid -- with her partner Ryue Nishizawa in 2010, explained how she has pursued the path of making space collaborate with nature and the city.

“I wanted people to be able to communicate inside the buildings I designed. I also wanted to connect the interior of the structures with the exterior,” Sejima said. 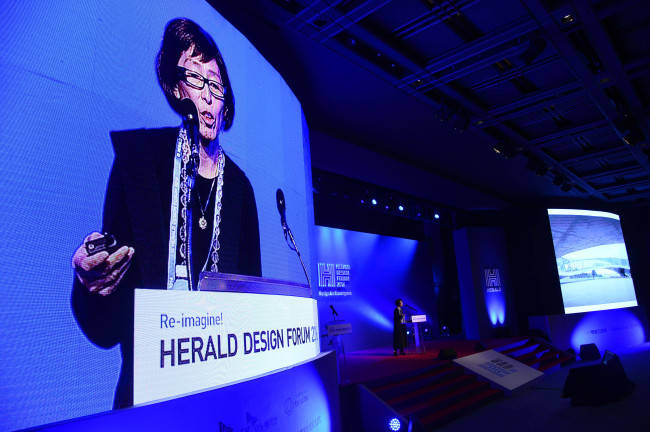 Pritzker Award-winning architect Kazuyo Sejima speaks during the Herald Design Forum 2016 held at the Grand Hyatt Seoul on Tuesday. (Park Hae-mook/The Korea Herald)
Many of her works, which include the Louvre Lens in northern France, the Rolex Learning Center at EPFL in Lausanne, and the New Museum of Contemporary Art in New York, are one story-buildings featuring big windows and white walls, as if to link the inside with the outside.

In her work, Sejima is careful not to interrupt the surrounding nature while stressing the importance of bringing the feeling of continuity to the space users.

“While working on the Louvre Lens, I tried to avoid touching the topography. The land was shaped in a triangle and we divided it into five parts and bridged each of them in some different heights,” she explained. The one-story building is surrounded by glass walls to allow the scenery to go along with what is displayed inside.

“I used aluminum for some parts of the walls, which would reflect the green views outside the building. It diffuses light, and we hoped the building would be integrated with nature,” the 60-year-old architect said. 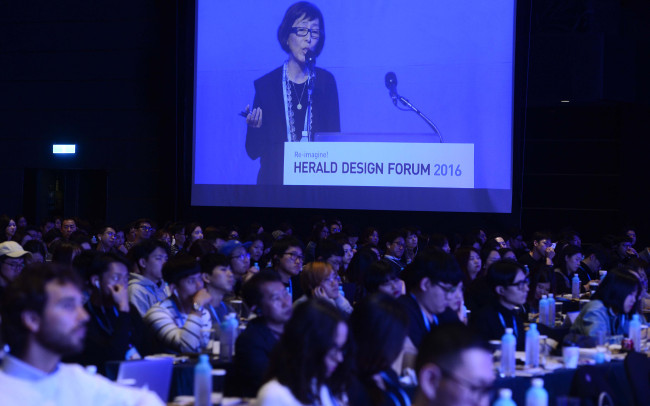 Architect Kazuyo Sejima speaks at the Herald Design Forum 2016 held at the Grand Hyatt Seoul on Tuesday. (Park Hae-mook/The Korea Herald)
Sejima’s affection for glass marbles, steel and aluminum is seen also in her project on the island of Naoshima, in Kagawa Prefecture, Japan. She closely observed and studied the project site before starting to work on her plan.

“I wanted to revitalize the island with art. I thought about respecting the state and the context of the island and decided to reflect it in my work.”

The architect was not afraid to use traditional tiled roofs with open glass walls, which allowed the works to be modern and sleek while open to the surrounding environment at the same time.

Inviting her friends and students, she also completed a project for a nonprofit group, Grace Farm Foundation last year in Connecticut, U.S. “This time, instead of building more galleries, we decided to create something that can be used by people.”

By listening to the clients’ demands, Sejima obtained a new perspective. The client wanted to build an area like a church in the beginning, where people could spend their time dinning and sharing their thoughts. Through discussions, the clients decided to build a library, a dining area, a gym and an open auditorium in a connected building.

Sejima called it a “rare experience” for her and the project team. “I realized that more people have decided to think and find what is important for them and what they need. You know, requests from the real users. And I hope this shows the rising importance of convergence in architecture.”