World renowned designers, architects and IT entrepreneurs gathered at the Herald Design Forum 2016 Tuesday to share their know-how on converging design with technology and business sense.

Now in its sixth year, the largest design forum in Asia was held under the theme of “Design for Convergence.” 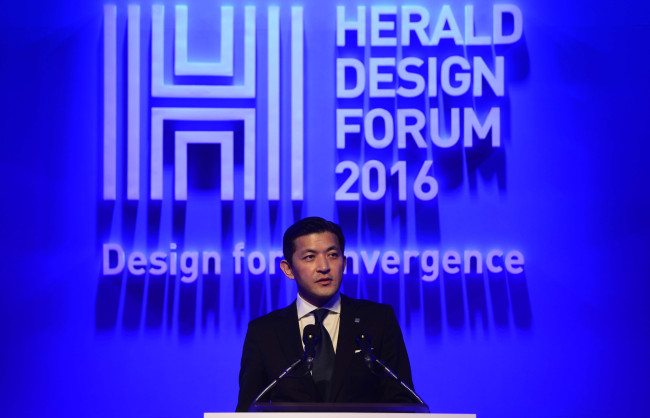 Jungwook Hong, chairman of Herald Corp., speaks at the Herald Design Forum 2016 held at the Grand Hyatt Seoul on Tuesday. (Park Hae-mook/The Korea Herald)
Jungwook Hong, chairman of Herald Corp. and the forum organizer, noted in his keynote speech that design is no longer limited to being an artistic subject, but has become more segmented with the emergence of a new academic focus on industrial, engineering, visual, architectural, media, graphic, fashion and even hair design.

“It is said that a successful designer today possesses not only an in-depth understanding of internet technology and engineering, but also knowledge of the arts and humanities, such as philosophy, aesthetics and literature,” Hong said.

Speaking to a packed audience of around 800 distinguished guests and participants at the Grand Hyatt Seoul, Hong said today’s consumers want to discover not only artistry but also technical solutions and a unique message within design.

“They want a specific product and service to simultaneously embody packaging and solutions as well as the brand and its story,” he said. “Modern designs must possess artistic and technical expertise as well an understanding of a company’s core business.”

In this sense, designers no longer have to respect established boundaries, Hong added.

In the era of convergence, designers are not limited to being artists -- they also act as technicians or entrepreneurs if they can offer new value to consumers.

Indeed, today’s consumers have a tendency to turn their backs to aesthetically unappealing products even if they have good technical features. At the same time, sleek designs alone will not attract consumers unless they also offer useful functions.

The expert speakers at the forum suggested that it would be more desirable to add effective business management skills to high-tech and good-looking products or services in order to reach consumers. 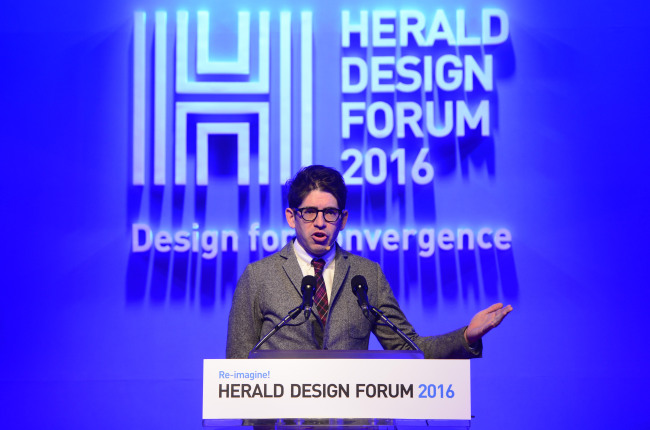 “We champion and celebrate the creation of art and culture,” Strickler said in his presentation. “When we try to make money, we are bound to erase culture and innovative thinking. We call that a money monoculture that we all should be cautious about.”

Before Kickstarter, Strickler was a music critic. He teamed up with two former artists to establish a financial platform for artists with creative projects to attract funding. 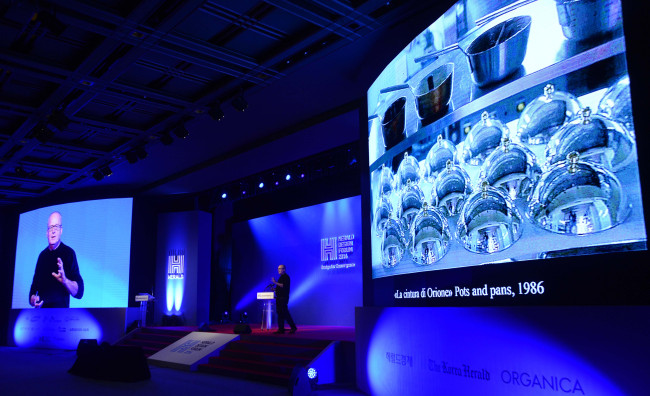 “Design is a global creative discipline with an artistic and poetical matrix that helps the industry to give birth to good products,” he said.

Alessi defined industrial products as those that have functional value combined with style and a sense of poetry.

“We believe that, even in contemporary mass production industry, the approach to the creation of new generations of industrial products must be truly artistic, meaning guided by inspiration, sensibility and talent of great designers and architects not by marketing,” he said. 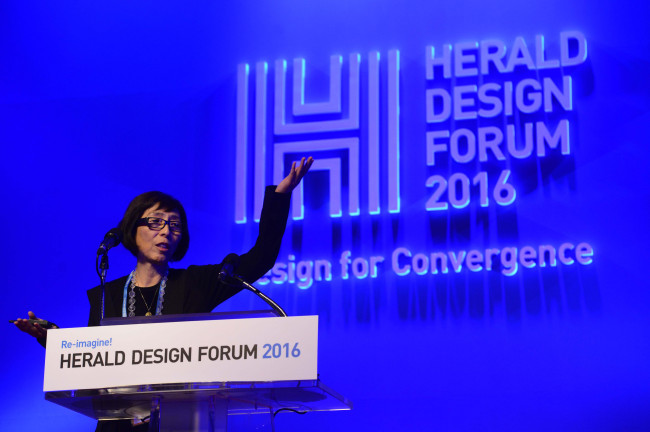 Architect Kazuyo Sejima, co-founder of SANAA, speaks at the Herald Design Forum 2016 held at the Grand Hyatt Seoul on Tuesday. (Park Hae-mook/The Korea Herald)
Architect Kazuyo Sejima, co-founder of SANAA, spoke on finding solutions to architectural design in nature and humanity. The Japanese architect, the winner of the Pritzker Prize in 2010, is well-known for blending her work with nature.

“It is important that architecture should collaborate with nature,” Sejima said. “Natural disasters like earthquakes are very scary. That is why I also think technology is important, but communication is more important in preventing disasters. I want to make a space where people communicate and share.” 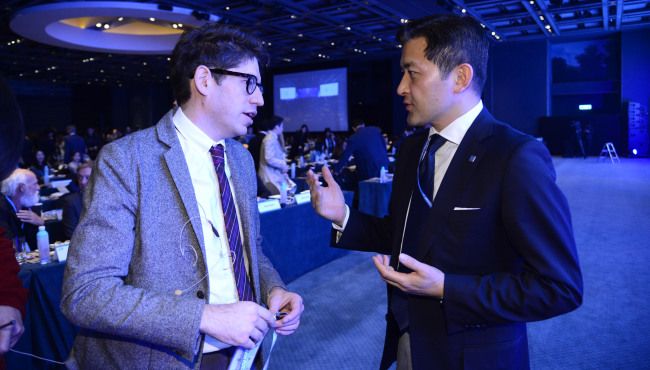 The Herald Design Forum was first launched in 2011 with the theme of “Design Changes the World.”