[ The Korea Herald – Send E-mail ]
Probes continue into Choi's daughter
By Ock Hyun-ju
Published : Nov 7, 2016 - 17:17
Updated : Nov 7, 2016 - 17:48
Chung Yoo-ra, the daughter of Choi Soon-sil, is under increasing scrutiny in South Korea, with prosecutors and educational authorities widening their probe into allegations that she received preferential treatment from schools, the equestrian league, and corporate sponsors.

Chung, who is currently overseas, is the only child between Choi, President Park Geun-hye’s longtime friend accused of meddling in state affairs, and Jeong Yun-hoe, Park’s former chief of staff.

The Ministry of Education said Monday that it would extend a special inspection for four days into the allegations that Ewha Womans University manipulated the admissions process and grading system for Chung.

The inspectors dispatched by the ministry are set to call in Namgung Kon, chief of admissions, who allegedly ordered faculty members to select a student who brought a “gold medal” to the admissions interview. Chung was reportedly the only one wearing a gold medal -- which she won at the 2014 Asian Games -- at the interview. 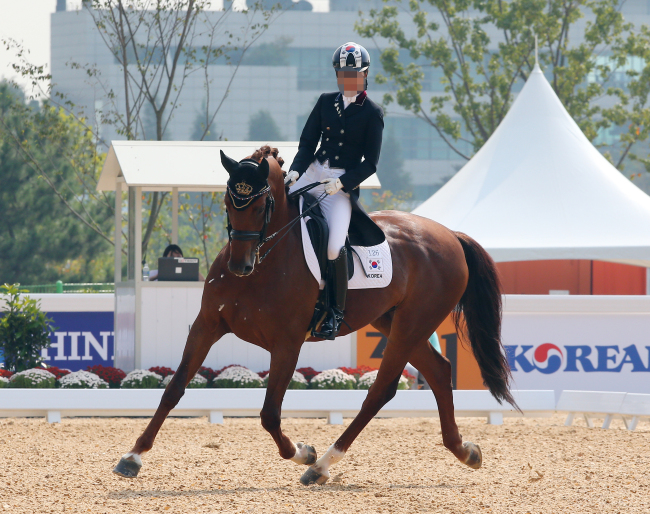 Chung Yoo-ra competes in the 2014 Asian Games (Yonhap)
The school is suspected of adding horseback riding to a list of categories open to student athletes in 2014, right before Chung’s admission. It also allegedly stretched its own rules to consider Chung’s medal even though she won it four days after the application deadline.

The ministry is also looking into whether professors gave her overly generous grades despite her not turning in assignments and missing most of her classes. The school also allegedly changed its school policy to grant student athletes grades if they submit documents as evidence.

Starting on Monday, the ministry is set to grill professors suspected of giving Chung preferential treatment.

“The result will be released as soon as the inspection is over,” said an official from the ministry.

A separate on-site inspection by the Seoul Metropolitan Office of Education into the alleged special favors for Chung widened to her elementary and middle schools, which are suspected of receiving kickbacks from her mother.

The education office is slated to release an interim result Tuesday.

Chung’s school Chungdam High School is accused of creating a program in 2011 to accept dressage athletes, right before her admission in 2012, in what many critics see as an attempt to find a way to accept Chung.

The focus is on whether she turned up to enough classes in order to meet graduation criteria. Under the current law, she was required to attend at least two-thirds of classes to graduate from the schools.

She allegedly attended her high school for only 28 out of 193 days in her senior year.

There is a possibility that her graduation from high school as well as her entrance into Ewha Womans University will be canceled if her records of attendance prove to be fabricated.

It summoned former and current executive directors from the Korea Equestrian Federation on Saturday to investigate whether the organization pulled strings to have Chung sponsored by Samsung Electronics and qualify for the national team for the Tokyo Olympics in 2020.

Prosecutors earlier found that Samsung Electronics last year transferred some 2.8 million euros ($3.1 million) to Core Sports, a company in Germany established by Choi and Chung. Some of the money was used to buy a horse for Chung and to cover training expenses in Germany.

According to a news report by TV network SBS, the government allegedly promised support for Samsung in return for the firm financially supporting Choi and her daughter.

A Samsung official involved in the suspicions was questioned last week. The company said that it would fully cooperate with the prosecution in the investigation.

Nearly 600 people from the sports industry declared a “state of crisis” through a statement on Monday, saying that the industry has been abused.

They called for an extensive investigation into Chung, as well as Choi’s niece, Chang Si-ho who was also a national dressage rider, and other allegations that Choi peddled influence over projects for the 2018 PyongChang Winter Olympics.