[ The Korea Herald – Send E-mail ]
British society chief stresses basic science
By KH디지털2
Published : Oct 30, 2016 - 13:44
Updated : Oct 30, 2016 - 14:10
Venkatraman Ramakrishnan, president of the Royal Society of London for Improving Natural Knowledge, more commonly known as the Royal Society, has stressed the importance of basic science, saying that investment in the field should be spearheaded by scientists.

"Reason to invest in science is that it is part of every culture of humans and so it is about how the world works, what we are and what the universe is like. These are increasingly important questions," the British structural biologist told reporters in Seoul on Friday.

The 64-year-old scientist has served as the president of the world's oldest society which dates back to the 1660s, since November 2015. He won the Nobel Prize in 2009.

The India-born scientist visited South Korea at the invitation of the Institute for Basic Science which is celebrating its fifth anniversary. 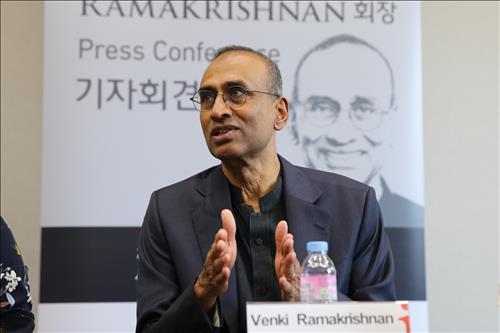 Venkatraman Ramakrishnan, president of the Royal Society of London for Improving Natural Knowledge, talks to reporters on Oct. 28, in Seoul. (Yonhap)
"One thing that many of us are surprised is the commitment of (the South's) government to invest in science. In terms of its gross domestic product per capita, South Korea is one of the highest investors," the scientist known has "Venki" said.

According to international science journal "Nature," South Korea is the world's largest investor in scientific research by pouring 4.29 percent of its GDP in 2014. The country outstrips runner-up Israel, as well as Japan and the United States.

"I would say it is a very good thing that (South) Korea is investing so much in science and that is one way for (South) Korea to continue to grow economically," he said.

The Seoul government has been spending big in the hopes of winning a Nobel Prize. However, many industry experts have pointed out the lack of a long-term plan.

"My advice is to see this as an long-term investment in the country and not look for quicker results," he said, adding that science should not only be funded top-down by a few people in the government.

"Good investment should come from scientists themselves because that is the only one way to get completely new ideas," the president said.

Venkatraman also urged the public to get more interested in basic science as the government funding in the field is done by taxpayers' money.

"It is the public right to know how money is spent. The public needs to know what science is about and how it is spent," he said.

The society, which earlier signed memorandums of understanding with the IBS, already held two joint seminars and plans to hold the third one.

"Our hope is that as time goes by, we will have some increased level of collaboration and the exchange of scientists," he said, stressing that there are many possibilities in the future.

Venkatraman, who initially majored in chemistry as an undergraduate, advised young scientists not to be afraid of failure.

"It's always the most important thing that people should do something they are really interested in," he said, noting that scientific works is very "tedious."

The biologist, who won a Nobel prize for his part in unlocking the key to the ribosome, said he is currently working to explore how proteins work.

"Noble Prize is not an end result... science has to keep on going," he said. (Yonhap)