[ The Korea Herald – Send E-mail ]
[NEW SAMSUNG] New era emerges for Samsung under Lee Jae-yong
By KH디지털2
Published : Oct 25, 2016 - 17:25
Updated : Oct 26, 2016 - 13:07
[THE INVESTOR] Ending 25 years of a high-profile hereditary succession, Lee Jae-yong, vice chairman of Samsung Electronics, is set to reach the apex of the leadership on Thursday as he steps into the boardroom responsible for the future of the world’s largest maker of smartphones and microchips.

The South Korean tech giant is holding an extraordinary meeting of shareholders at its headquarter in Seoul on Thursday to put the nomination of Lee’s board membership to vote. 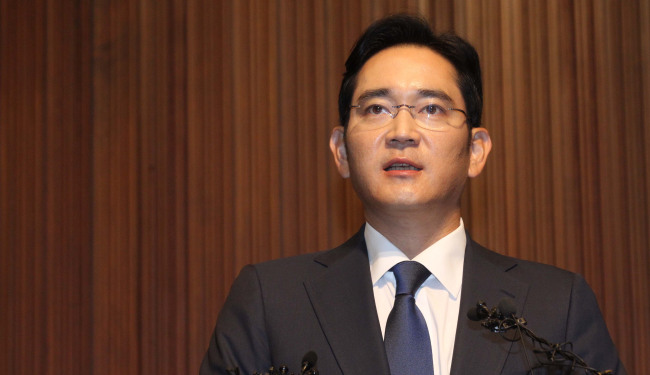 The vote will be taken without Lee attending or him giving a speech beforehand, the company said. But the news excited many as soon as the 48-year-old was nominated last month. The event is being viewed in the vein of a modern coronation of the heir to the nation’s largest conglomerate, and a new era for Samsung has arrived.

“It is a symbolic move for Samsung. Starting from Oct. 27, Lee Jae-yong will be taking the substantive responsibility, leadership and governance over Samsung Electronics,” said Chung Sun-sup, president of Chaebul.com, a local corporate watchdog.

The reason experts pin high hopes on the event is that Lee will have to bear the weight of the crown that was passed on to him, not just the power he has been exercising so far with no strings attached.

The size of his salary as well as the voices heard during the board meetings will be publicized for the first time. They believe that Samsung is making a step forward to a transparent management for investors wary of risks of Korean chaebol’s imperialistic management and mystic governance structure that support the power.

If the nomination is approved, Lee as a boardroom member will be responsible for any criminal or civil case involving Samsung Electronics.

He is the first ownership family member taking a boardroom seat at Samsung Electronics, the core business of the Samsung empire, since eight years ago. In 2008, his father Lee Kun-hee stepped down from the post, taking responsibility over the prosecution’s investigation into the group.

In addition to the larger responsibility he now has to shoulder, the market remains curious about what he actually has in mind to sustain Samsung’s top position, particularly at a time as the company is being hit by unprecedented fallout involving its high-end smartphones catching fire, and also at a crucial point when the tech giant has been struggling to become a market innovator instead of a fast-follower.

What appears to be clear for now is that Lee Jae-yong will continue to lead Samsung’s attempt to change its DNA from a manufacturing company into a software firm. The future of Samsung as a leader in bio and financial technology, though announced by his father six years ago, is also in Lee’s hands.

But before drawing a big picture, Lee has to resolve the current crisis Samsung is now facing.

“The way how he handles the Galaxy Note 7 crisis could determine Samsung’s fate. The question remains how he could deal with the market jitters on Samsung’s future and its future business,” said Chung.

Tightening the grip over Samsung as an organization is also crucial, as it failed to deal with the crisis consistently, exposing a gap in the group unity that has long been the backbone of its success.

“The unity (within Samsung) seems not as strong as it was in the past. I believe that explains a lot on the recall crisis. Now Lee has to take a pivotal role to put that loyalty back together,” said Chung.

Since joining Samsung Electronics in 1991, Lee climbed the corporate ladder faster than anyone else. He has long remained under the shadow of his father, the now bed-ridden Samsung Chairman Lee Kun-hee, except for his attempt with software business in the early 2000s.

He established 14 internet companies, but that ended with Samsung’s seven affiliates shouldering the loss the companies created. But the failure left a scar on Lee’s reputation, leaving many questioning about his quality as the next Samsung leader.

Lee Jae-yong making public appearances became more frequent after his father suffered a heart attack in 2014. With the chairman remaining unconscious, Lee, representing Samsung, apologized for causing public concerns over Samsung Medical Center’s involvement in the spread of Middle East respiratory syndrome in 2015. But he has not yet come forward over the recall crisis.

Park Ju-gun, co-founder of CEO Score believes that Lee’s entry to the boardroom at this particular moment is not about the new beginning of Samsung, but Lee being pushed to face a reality test.

“His father made Samsung the top company in the world, but it was carried out in the market that already existed. Lee Jae-yong, on the other hand, has to discover a new paradigm, new market for Samsung to survive. This is a big task,” he said.

Some Samsung insiders say Lee, called “JY” or “VIP” within the group, is a man who pursues pragmatism and wants to focus on business portfolios carefully selected.

Unlike his father who ruled Samsung with charismatic leadership, Lee Jae-yong’s leadership will be different because it has to be. The market is different, so are social demands.

On top of the market transformation valuing creativity rather than efficiency and software rather than hardware, Lee also faces changing social perception of chaebol families’ unconditional ownership and the unnatural succession process, experts say.

The long process of the succession scenario began in 1994 when Lee Kun-hee gave his son 6.1 billion won ($5.38 million) as a gift.

The fund was seed money for Lee Jae-yong’s succession, writes Cha Ki-tae in his book “Lee Kun-hee’s Samsung, Lee Jae-yong’s Samsung” (2016), and that 4.5 billion won after gift tax was invested in shares of Samsung’s unlisted companies.

After the companies went public, Lee Jae-yong’s stakes got bigger, so did their value. He holds shares that value 1,980 times more than the gift he received 22 years ago. He holds 0.58 percent of Samsung Electronics, but controls it through Samsung C&T’s 4.8 percent in the tech giant. He holds 17.23 percent in Samsung C&T, the de facto holding company of the Samsung empire.

In the past, South Koreans were “generous” to conglomerate owners passing their batons to their children, believing that keeping the power within the family would keep the companies free from external influences.

Despite Samsung’s role in the growth of Korean economy, however, customers have become cooler-headed when making decisions, and more open to diverse options, Cha said, stressing that the succession that chaebol, including Lee Jae-yong, went through would no longer be acceptable.

Pessimistic views also linger not just on Lee’s leadership but the future of chaebol system.

“The new Samsung or innovative Samsung was conjured up by the group‘s future strategy division and not by the leader himself. ... He should show his determination and consequent responsibility.”