The Improper Solicitation and Graft Act, which came into force last month, bans members of civil agencies, private educational institutions and the media from giving and receiving free meals, presents or monetary gifts worth 30,000 won ($27), 50,000 won and 100,000 won or higher, respectively. 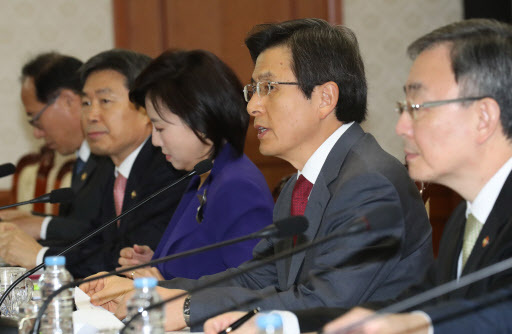 Prime Minister Hwang Kyo-ahn (second from right) speaks during a Cabinet meeting in Seoul on Friday. (Yonhap)
But the Anti-Corruption and Civil Rights Commission, the chief enforcer of the so-called Kim Young-ran law, has been criticized for flip-flopping on its clarifications of some cases and failing to provide clear details in response to queries from the public and organizations.

“As we are at an early stage of the implementation, and given that some 4 million people are subject to the law, it is true that some confusion exists,” Hwang said at a meeting with ministers of related agencies.

“There is controversy over whether a certain action violates the law or is subject to it in the first place. Despite the commission’s efforts, we need to boost education and raise awareness on the legislation and casebooks.”

To tackle confusion, the premier called for the commission to work more with the Justice Ministry, the Ministry of Government Legislation and other related agencies to comprehensively review the interpretations.

“The reason behind the law is to establish a transparent society, not to block civic officials from working actively,” he said.

As part of the efforts, the government plans to launch a task force team to review official interpretations of the act starting later this month. It will issue weekly reports on frequently asked questions and distribute manuals to public organizations.

The commission has said it will allocate more staff to better handle surging inquiries.