Her famously level gaze that for decades could silently convey “Really?” looked only weary as she sipped pomegranate juice to ease a cough.

Always svelte, Steinem now tips toward frail, yet padded about barefoot in the India-infused garden level of her New York City duplex, rocking a flamingo-pink T-shirt and black slacks.

To update her famous retort about age: This is what 82 looks like.

Steinem's hair, with its iconic middle part, mingles gray with blond. No, she’s never thought to change it, never minded being recognized. Not like her stepson, actor Christian Bale -- Batman in the “Dark Knight” trilogy -- who shuns publicity.

“He hates interviews because he‘s being recognized for something he is not, only for a role he played,” Steinem explained. “But when I’m recognized, it‘s for something I feel devoutly about.”

For decades, Steinem has been the face of feminism. There have been sisters: Betty Friedan, Flo Kennedy, Bella Abzug, Wilma Mankiller. But it’s Steinem (who‘s wryly noted how she morphed from being called “pretty” to the more sexualized “beautiful” as her profile rose) who epitomized the women’s movement.

While her latest memoir, “My Life on the Road” -- just published in paperback -- is more personal and less political than her previous five books, it‘s clear the matriarch hasn’t mellowed.

Consider the book's dedication to the London doctor who, at risk to himself, helped her get an illegal abortion in 1957. Heading to India at 22 after breaking an ill-fated engagement, Steinem said he asked only that she’d promise to “do what you want to do with your life.” She concludes: “I‘ve done the best I could.”

She also minces few words about Friedan, a white, middle-aged, middle-class woman in 1963 when she wrote “The Feminine Mystique” and then co-founded the National Organization for Women.

Steinem wrote that Friedan was hostile to efforts to make the movement more responsive to lesbians, to women of color, to women in poverty. She called younger feminists such as Steinem “disrupters” and the mutual antipathy would exist for years.

Now it feels like deja vu all over again.

Steinem is frustrated to be fielding criticism from younger feminists who carry echoes of the past, and, more to the point, misunderstand her legacy. They see the movement as mired in white, middle-class values. They wish it were more responsive to lesbians, to women of color, to women in poverty -- to which they add the more recent issue of gender identity.

The trending term is intersectionality, or how gender, class, race, age and sexual orientation are linked. Critics say traditional feminism is too narrowly focused on women’s rights and discounts how race and class also matter.

So, do they have a point?

Steinem's level gaze ignited ever so briefly into a stoic “Really?” before cooling into explanatory mode.

“Intersectionality actually is not a new term,” she said, noting that it was coined almost 20 years ago. “And if we didn’t have intersectional as a word before then, we had other terms like ‘double jeopardy,’ for the issues caused by both race and sex.”

The perception of feminism as a white woman‘s cause grew in part because success was linked to equality in the workplace, and workplaces at the time were more open to white people. Media tended to regard the concurrent fights for equality across race and gender as separate, rather than intertwined.

“I think part of it was just assumption,” Steinem said. “If I was speaking on a panel with an African-American woman, she’d be asked about civil rights and me about feminism, even though we both were there for the same reasons of equality.”

She sighed. At 82, she is still explaining, still defending.

Steinem's memoir tracks an endless life on the road as a community organizer, speaker and founder of Ms. magazine -- a routine so entrenched that for 20 years her longest stretch at home was eight days.

She came by her traveling nature honestly, honed by years in the car with her father, a traveling antiques salesman of marginal success. He’d come and go from their home in Toledo, Ohio, more or less living in his car, and occasionally bringing along Gloria or her older sister.

Come winter, he'd uproot the family and head for Florida, selling goods along the way to make ends meet, everyone sleeping in the trailer they pulled, showering in bus stations.

Books were Steinem’s escape; she read incessantly. But her school attendance was casual, at best.

The lifestyle took its toll. When Steinem was 10, her parents separated. Her mother, prone to depression, had a nervous breakdown.

Steinem lived with her in Toledo until her mother sold the house so that Steinem could attend Smith College.

The traditional path of marriage and family seemed inevitable, yet unnerving. “Then the movement came along and I realized that I wasn’t crazy. The system was crazy.” 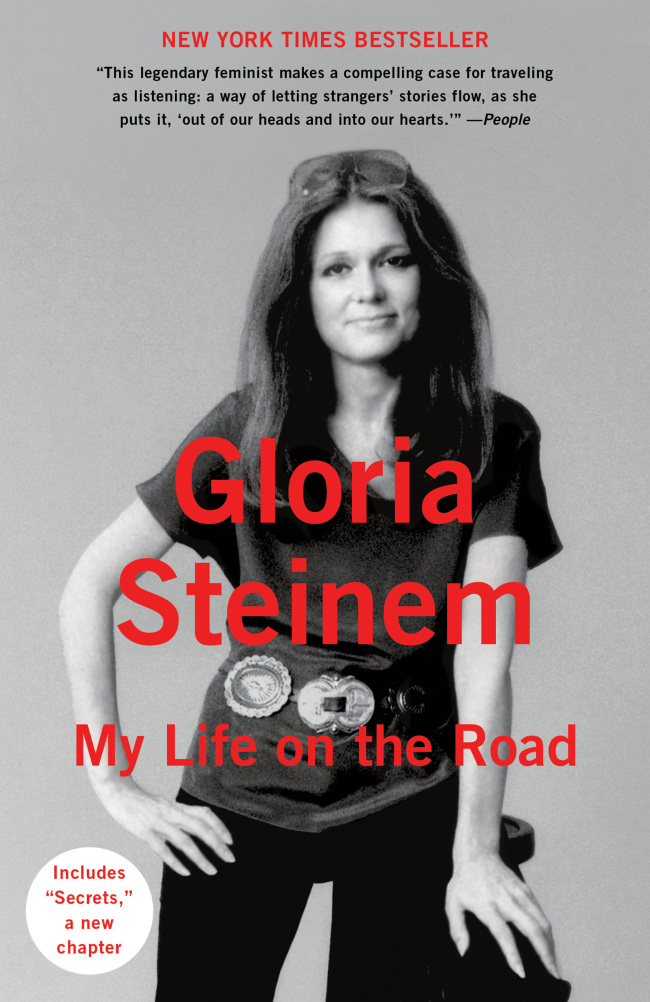 “My Life on the Road” by Gloria Steinem (paperback) (Penguin Random House)
She smiled. At 82, she is still explaining, while beginning to reminisce.

Steinem still makes headlines, and not always by design.

Earlier this year, a Lands’ End catalog featured an interview with her about such topics as women in the workplace and efforts to pass the Equal Rights Amendment. For items ordered with an ERA Coalition monogram, Lands’ End would donate $3 to the Fund for Women's Equality.

Abortion never came up, but anti-abortion activists swiftly voiced their anger that the company would honor Steinem. Lands’ End apologized, which spurred others to castigate the company for flip-flopping.

Steinem shook her head at the dust-up, though she hardly took it personally.

“The right-to-life crowd -- if they liked me, I would worry,” she said, laughing. “There are vast numbers of people I‘m delighted to be criticized by. What hurts is when people with whom you share values are hostile.”

That would be Bill Maher and those who leaped on remarks she made on “Real Time With Bill Maher” that appeared to dismiss young female supporters of Bernie Sanders’ presidential bid as boy-crazy.

Steinem was making the point that more women than men support Hillary Clinton because women get more radical as they grow older and lose power, while men “tend to get more conservative because they gain power as they age.” Here‘s where it began to go wrong: “And when you’re young,” she said, “you're thinking, 'Where are the boys? The boys are with Bernie.’”

“Oooo,” Maher broke in, joking that she’d swat him for such a sexist remark. Steinem stammered, flummoxed that anyone would believe she’d suggest such a thing when “it was so distant from anything I’d ever said in my life.”

In her mind, she said, “I had been talking about how young women are angry about graduating with so much debt, and was making the point that boys are where the power still is. But I got interrupted and it became about dates. I never got to the word ‘power.’”

She regrets now that she hadn’t been clearer. In a Facebook post, she said she’d been “misinterpreted” and noted that she’d also applauded “a vigorous strain of feminism among today’s young women.”

She brings up something Maher said during his “Overtime” segment, a group discussion among guests, among them environmental lawyer Erin Brockovich. Steinem and Brockovich had never met and were praising each other when Maher leaned in: “Hey, start makin’ out, you two.”

“That’s where his head is at,” Steinem said tersely, relating that back to his Sanders remark. “He took half a sentence in a sexual way and,” she sighed, trailing off. At 82, she is still explaining, still defending.

In 2000, she married David Bale, a South African businessman, animal rights activist and environmentalist. Some smirked that she‘d joined an institution she’d once likened to slavery.

“I didn‘t change,” she responded. “Marriage changed. We spent 30 years in the United States changing the marriage laws. If I had married when I was supposed to get married, I would have lost my name, my legal residence, my credit rating, many of my civil rights. That’s not true anymore. It's possible to make an equal marriage.”

Soon after, Bale was diagnosed with a brain lymphoma and died in 2003. Yet their marriage prompted Steinem to unpack long-packed boxes and truly settle into her duplex on New York’s Upper East Side, which she'd bought in 1968. The lower level is a bohemian sanctum, all pillows and rugs and dark furniture from her travels in India. A curtain defines her “office.” A small courtyard garden provides a slice of sunlight.

A tour of the upper level on Oprah.com shows decidedly more vibrant and fashionable digs, with seating everywhere for her beloved talking circles. She’s placed the home in a trust to be a future working space for feminists, although she intends to live to 100.

Yet in the past year, she's traveled to Australia, New Zealand, Zambia, Ireland, England, Italy and Morocco. Some trips were for photographer Annie Leibovitz’s “Women: New Portraits” book, for which Steinem wrote an introduction. Other trips are less visible, such as the one to Shakopee Women's Prison, where she helped raise money for the unPrison Project, which builds literacy and other life skills among women in prison.