Earlier Tuesday, Samsung Electronics said it will ask “all carrier and retail partners globally to stop sales and exchanges of the Galaxy Note 7 while the investigation is taking place” to prioritize consumer safety.

The suspension announcement came one day after Samsung halted the production of the Note 7, following multiple incidents in which the exchanged Note 7 devices fitted with new batteries caught fire due to overheating — prompting investigations in the US, Korea and elsewhere 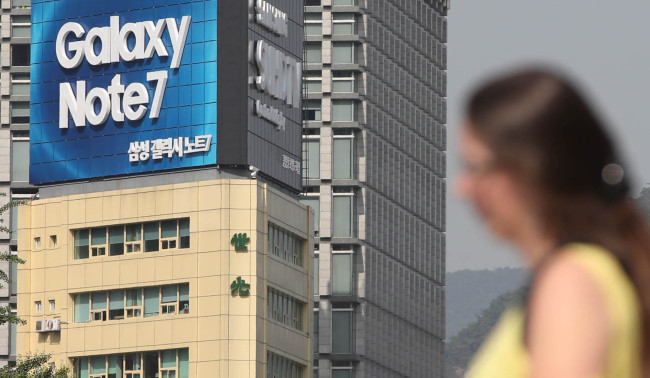 (Yonhap)
The recent turn of events had raised the possibility that there could be additional problems with the Note 7 other than faulty batteries — as diagnosed by Samsung — that are causing even the exchanged devices to catch fire.

Amid Samsung's decision to discontinue sales of the Galaxy Note 7 globally, the electronic giant’s key partners here, most notably telecom companies, are bracing for the financial consequences.

Korea’s three network carriers SK Telecom, KT and LG Uplus on Tuesday said that they have “stopped the sales of the Note 7, with plans to swiftly announce the subsequent procedures for full refunds or exchanges to different models.”

The refund and exchange procedures are expected to involve many complications as well, due to the sheer scale of the affected devices and the diverse domestic sales channels involved. 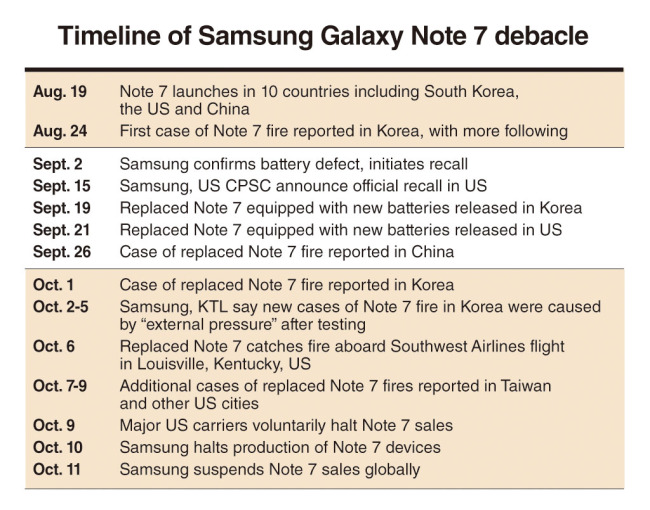 Considering that Samsung is the most-favored smartphone model among Koreans — Samsung accounts for around 70 percent of the Korean smartphone market — local carriers are likely to see a major plunge in sales in the latter half of this year and beyond.

“We had already experienced more than a 30 percent on-year drop in sales in August and September of this year largely due to the Note 7 recall. But it looks like it won’t get any better,” one owner of a local cell phone retailer in southern Seoul told The Korea Herald.

“Business seemed to be recovering after sales of the Note 7 resumed on Oct. 1, but the sales have once again stopped after just 10 days,” the retailer said. “It’s going to be a difficult period for telecom firms and phone retailers like us, as well as the greater Korean economy.”

While Samsung pulls its latest premium smartphone from the market and struggles to salvage its tarnished brand image, rival smartphone makers Apple and LG Electronics are expected to enjoy heightened interest from customers looking for alternatives to the Galaxy Note 7.

Meanwhile, US electronics giant Apple is slated to release the iPhone 7 and iPhone 7 Plus in Korea on Oct. 21. Prices have yet to be made public. Expectations are high that local customers would choose to purchase a new iPhone in the absence of Samsung’s latest smartphone.

“The market reception of the LG V20 has been better than usual, and I think some customers who now own Samsung devices may switch to an LG model” said a salesperson at a phone retailer in central Seoul.

“However, some people simply prefer Samsung smartphones, and may choose to wait for the next model rather than switch to an iPhone or the V20. We have to wait and see,” he said.

In addition to the telecom sector, local firms which supply components and parts to Samsung are likely to suffer as the Korean electronics manufacturer discontinues the sales of the Note 7. Some 2.6 million units of the Galaxy Note 7 have been sold worldwide so far.

Small and mid-sized companies including Amotech, Hansol Technics and Kolen which produce parts for Samsung smartphones saw their shares drop nearly 30 percent in the past month as their businesses are highly dependent on orders from Samsung.

“If Samsung decides to completely cease production of the Note 7, it could deal a serious blow to its partners,” an official from one of the affected suppliers was quoted as telling The Investor.

Samsung Electronics had announced a global recall of the Galaxy Note 7 in early September after reports that some of the devices had overheated, causing explosions. Samsung attributed the problem to a defect in the battery and replaced the faulty phones with new ones fitted with new batteries.

Yet, reports of exchanged Note 7 devices catching fire began to soon emerge, igniting fresh doubts over the device’s safety. So far, five cases of replaced Note 7 fires have been reported in the US, one in Korea, one in China and one in Taiwan, according to international media reports.

While the Note 7 debacle will obviously deal a costly blow to Samsung’s fourth-quarter sales and operating profit, analysts say Samsung’s biggest problem is figuring out how to restore its brand image and win back consumer trust.

“The immediate financial losses may be a lesser problem for Samsung Electronics than the long-term damage to its brand image,” NH Investment & Securities analyst Lee Se-chul said in a report released Tuesday.

“In introducing future products, the firm will need to prioritize quality control (over cutting-edge technology),” he said.

Lee projected that Samsung Electronics will sustain damages of at least 700 billion won in the fourth quarter alone from suspending the sales of the Note 7, with further expected losses.