“You never know where the ball will bounce to, exactly like the financial market,” said Yang. “Our goal is to keep the ball in our hands, meaning, keeping all the underlying assets -- stocks, bonds, commodities -- under control and carry out efficient allocation.” 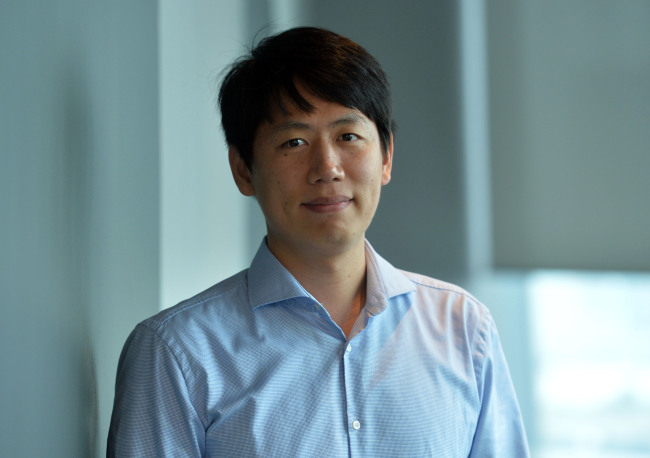 In April, Quarterback Investments launched the market’s first robo-advisor fund with Kiwoom Securities, calling it Kiwoom Quarterback Global Robo-advisor Fund. The fund investing in global bonds based on advice from Quarterback’s algorithm marked 2.9 percent in accumulated yields as of Tuesday.

Another fund launched in June with a portfolio of various stocks showed 3.5 percent in yields as of the same day.

“As humans get old, so does their intellection,” Yang said. “With that in mind, as a fund manager, I needed algorithms that never go against principles, which can help human managers make better investment decisions.”

More than 90 percent of securities accounts in the market are suffering negative yields, according to the CEO, largely because investors fail to abide by principles as they get easily overwhelmed by emotions.

“Quarterback’s robo-advisor algorithms analyze a variety of asset classes and allocate them according to models based on the machine learning method,” he explained. “They ceaselessly find new variables applicable to the models and reflect them, which can respond to market changes in a systematic manner.”

The key to developing smart algorithms is big data. Quarterback has collected data about 300,000 underlying assets and around 2,500 equity-traded funds across the globe.

With the robo-advisor algorithms, Yang seeks for “reasonable” yields that are sufficiently adjusted for risks.

“One goal is to maintain mid-risks and mid-returns,” he said. “Another is to make asset management services more affordable for the general public.”

Using such algorithms can help reduce labor costs incurred during advising for investments and managing funds, resulting in cheaper asset management services for more individuals, contrary to current services being offered to the wealthy by staff called private bankers.

Yang is also preparing to export the company’s algorithms to other countries.

Quarterbacks acquired Doors Capital, an investment advisory firm, in Japan last month. The company is targeting the Japanese retirement pension fund market that is estimated to be around 1,200 trillion won.

“Since Japan has negative interest rates, demand for mid-risks and mid-returns has grown significantly,” he said. “Japanese pension funds that we have met just want 2 percent yields, which we can reach confidently.”

“It has been difficult for financial firms to go global due to market barriers including the language problem, but global expansion has become much easier by exporting such algorithms,” Yang added.

The US may be the next target of Quarterback, where the robo-advisor market is already as large as $2 trillion.

“About 20 percent of all funds is forecast to be managed by robo-advisor platforms in the US,” he said. “It is too early to unveil our plan, but we are meeting with numerous American financial institutions.”