[ The Korea Herald – Send E-mail ]
Controversy boils over preemptive strike on NK
By Shin Hyon-hee
Published : Oct 9, 2016 - 17:22
Updated : Oct 9, 2016 - 18:14
In the aftermath of North Korea’s fifth nuclear test, calls are rising around Washington for the need to prepare a preemptive strike on the communist state’s nuclear and missile facilities, prompting skeptics to question its viability and legitimacy.

Last month’s underground blast has triggered a heated debate over ways to stop leader Kim Jong-un’s ostensibly accelerating nuclear development and unabated provocations, including dialogue and even a regime change.

Some former administration officials and experts have meanwhile floated the idea of a preemptive attack on the condition that Washington and Seoul have detected clear signs of the North’s immediate launch of a nuclear-tipped missile.

The issue was brought up during a US vice presidential debate last week. Asked whether he would take preemptive action against an impending missile firing, the Democratic candidate Tim Kaine said a president “should take action to defend the United States against imminent threat,” though the action should depend on the content of and his confidence in the intelligence. 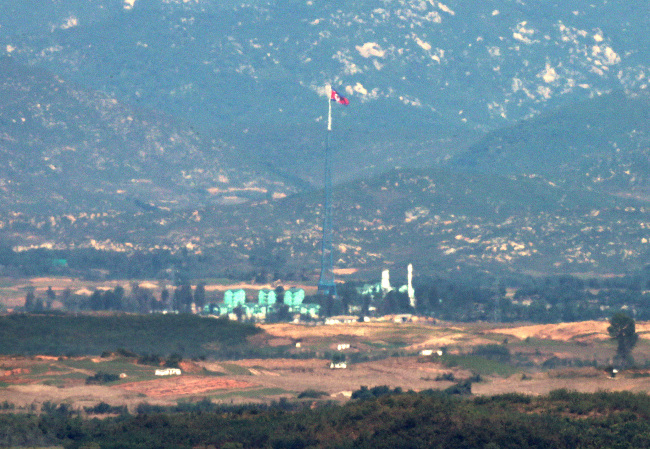 A North Korean flag flutters over the propaganda village of Gijungdong, as seen from an observatory in Paju, Gyeonggi Province, on Sunday. (Yonhap)
In a report last month, a task force compiled by the Washington-based Council on Foreign Relations urged the US, South Korea and Japan to signal that future aggression would be met with an “active and proportionate response, which may include strikes against military targets inside North Korea.”

Introducing the paper, former Chairman of the Joint Chiefs of Staff retired Adm. Mike Mullen highlighted the significance of building the defense capabilities so as to be able to “theoretically take out launch capabilities on the launch pad or take them out once they are launched.”

Last year, the allies completed the drawing of a new operational plan, OPCON 5015, which calls for a preemptive strike on the North’s nuclear and missile facilities as well as “decapitation” raids targeting the leadership. Their militaries have since been applying the scenario to their joint exercises.

Given constraints like possible flaws in intelligence and risks of escalation, the preemption option should remain a last resort, critics say, calling for the allies to focus on forestalling such a situation instead.

“Despite Mullen’s remarks, a preemptive strike is difficult to carry out in reality,” Kim Hyun-wook, a professor at the Korea National Diplomatic Academy, said in a paper released Friday.

“Further, the CFR report overall gave top priority to parallel operation of sanctions and dialogue. So if the next US administration happens to consider a preemptive strike, it would be a final resort.”

During a parliamentary audit on Friday, Gen. Lee Sun-jin, chairman of South Korea’s Joint Chiefs of Staff, also said it was “extremely difficult” to identify signs of a forthcoming nuclear attack from the North.

“We compile and assess data by mobilizing South Korean and US reconnaissance assets but can’t call it complete,” he told lawmakers.

Under international law, anticipatory self-defense requires two elements to be carried out: necessity and proportionality.

Its necessity should be “instant, overwhelming, and leaving no choice of means, and no moment of deliberation.” In other words, the state should demonstrate that it faces imminent threats from the other one and there is no option but the use of force in order to avert the attack. The response must also be proportionate to the threat.

The principles derived from the Caroline case in 1837, in which the British colonial government assaulted an American steamer carrying supplies for Upper Canada rebels, within US territory.

Article 51 of the UN Charter also governs the member countries’ right to self-defense but its interpretations remain divided. Some scholars -- or so-called “restrictionists” -- claim the provision is to limit the use of force only to when an armed attack has occurred, thus rejecting any kind of preemptive action. But others -- or “counter-restrictionists” -- argue that the reference of an “armed attack” is just one of the circumstances that would validate self-defensive acts, and the post-Caroline norms still prevail.

Pyongyang’s ceaseless provocations and state media claims of success in various strategic weapons tests may be helping to consolidate the logic behind a preemptive strike.

Yet the allies could face criticism if they are found to lack sufficient evidence after initiating an attack -- a failure to meet the “necessity.” Any first use of a nuclear weapon in particular might spark controversy over its “proportionality.”

“States ought to respond if they come under the threat of an attack -- it’s a sure thing,” said Chun Yung-woo, a former presidential secretary on foreign affairs and security and currently advisor at the Asan Institute for Policy Studies.

“There may be differences, however, in terms of what constitutes imminence, so they need to be ironed out through prior consultations between South Korea and the US.”

For instance, a transfer of North Korean fissile devices and materials to a terrorist organization counts for Washington as a valid condition of a preemptive strike. Seoul, in contrast, would regard a looming attack directly from the North as its first and foremost prerequisite, Chun noted.

Yet what is more important at this point, Chun said, is to station US strategic bombers and advanced reconnaissance assets on, over and around the peninsula at all times so that the allies could better detect and respond to any contingency.

With the existing equipment including missiles and fighter jets, they are only capable of “disrupting” soft targets in the North, short of “destroying” core, high-valued ones, under the allies’ “4D” proactive defense concept, he said.
“The US has at times been reluctant to send an aircraft carrier strike group or fly bombers from Japan, Guam or its mainland in the face of budget problems,” Chun said.

“As North Korea’s threats become more serious and real, however, the US will have to change its way of thinking, forward deploying precision bombers and reconnaissance assets alike, and bringing reinforcements.”

A senior Seoul diplomat said the ongoing preemptive strike talk itself could rather serve as a “deterrence” against the defiant regime, while helping sharpen the policy choices of the incoming US leadership.

“I think it is one of the signs that demonstrates the graveness of the North Korean threats, and it’s not a bad thing at all for us to have more people in Washington paying attention to the issue,” he said, requesting anonymity due to the sensitivity of the matter.

“Some may claim that you drive a crazy man even crazier by repetitively talking about preemption, but on the other side there are plus factors especially from the aspect of deterrence,” the official added, referring to Kim.