The United States on Monday blacklisted a Chinese firm, its owner and three other company officials, and announced criminal charges against them for assisting North Korea with its nuclear and missile programs, a landmark move representing the first-ever sanctions on a Chinese entity over Pyongyang's weapons programs.

The sanctions on Dandong Hongxiang Industrial Development Company Ltd and its officials followed recent revelations that the firm exported aluminum oxide, which can be used in enriching uranium, a nuclear bomb ingredient, to the North at least twice in recent years.

The company has also been accused of selling other "dual-use" items that can be used for both civilian and military purposes, such as aluminum ingots, ammonium paratungstate and tungsten trioxide, all of which can be used in the North's missile or nuclear programs.

Monday's measure marks the first time that the US has imposed sanctions on a Chinese company in connection with the North's nuclear and missile programs. The decision shows Washington's commitment to cracking down on those assisting with Pyongyang's weapons programs in the wake of its fifth nuclear test.

The sanctions could have powerful impacts on the North as they are expected to scare other Chinese firms away from dealings with the North for fear that they could also be blacklisted by the US.

The Treasury Department said it blacklisted the Chinese firm for "acting for or on behalf of (the North's) Korea Kwangson Banking Corporation" that has been blacklisted by the US and the U.N. for providing financial services for weapons of mass destruction programs.

It also blacklisted the company's owner Ma Xiaohong, and three other company officials -- Zhou Jianshu, Hong Jinhua, and Luo Chuanxu -- for similar charges. Under the sanctions, any assets in the US of the company and the four officials are blocked and US citizens are banned from dealings with them, the Treasury said.

In addition, the Justice Department "unsealed criminal charges against" the Chinese firm and the officials for "conspiring to evade US economic sanctions," violating US regulations on sanctions against WMD proliferators as well as for "conspiracy to launder money instruments."

Moreover, the Justice Department announced the filing of "a civil forfeiture action for all funds contained in 25 bank accounts belonging to" the Chinese firm and its front companies and "a request for a restraining order to be sent to China for all of the funds," the Treasury statement said.

The Justice Department said that the charges against the Chinese firm and its officials were filed on Aug. 3. It said the company officials established "numerous front companies" in the British Virgin Islands, the Seychelles, Hong Kong and elsewhere, and used them to conduct US dollar financial transactions through the US banking system when completing sales to North Korea.

"The charges and forfeiture action announced today allege that defendants in China established and used shell companies around the world, surreptitiously moved money through the United States and violated the sanctions imposed on North Korea in response to, among other things, its nuclear weapons program," Assistant Attorney General Leslie Caldwell said in a statement.

"The actions reflect our efforts to protect the integrity of the US banking system and hold accountable those who seek to evade US sanctions laws," she said.

Assistant Attorney General John Carlin said the charges reflect the US commitment to "using all tools to deter and disrupt weapons of mass destruction proliferators."

"One of the strengths of our sanctions programs is that they prevent sanctioned wrongdoers from engaging in US dollar transactions. Denying the use of the US financial system can greatly curtail illegal activities and disrupt efforts to provide weapons of mass destruction to terrorists and rogue nations," he said. 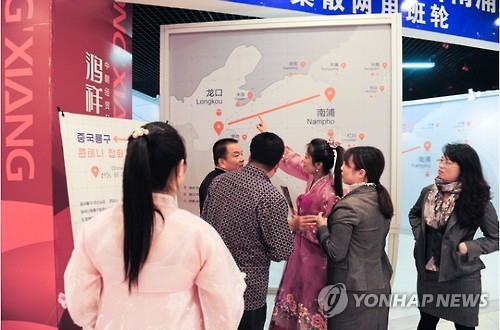 Allegations about the Chinese firm's illicit dealings with the North were first raised last week in a joint research report by South Korean and US think tanks -- Seoul's Asan Institute for Policy Studies and Washington's US Center for Advanced Defense Studies.

The report said that the Chinese company, which is one of six subsidiaries of China's Liaoning Hongxiang Group, engaged in $532 million worth of trade with the North between 2011-2015, importing some $360 million of goods from the North and exporting the rest.

It also said that the six subsidiaries have also transacted with sanctioned North Korean entities, have been associated with North Korean cyber operators, and have traded in various goods and services that raise proliferation concerns.

"By highlighting the danger of having dealings with the North, it is expected to alert individuals and organizations in other third countries and help strengthen the global community's will to faithfully enforce U.N. Security Council resolutions," a foreign ministry official said on condition of anonymity.

"The government will closely consult with relevant countries, including the US, in order to ramp up sanctions and pressure the North going forward." (Yonhap)