[ The Korea Herald – Send E-mail ]
'Organic architect' finds inspiration in snakes and peanuts
By Korea Herald
Published : Sep 20, 2016 - 15:21
Updated : Sep 20, 2016 - 15:21
NAUCALPAN, Mexico (AP) -- Architect Javier Senosiain looks out over his sinuous snake’s nest of a building, which seems to writhe amid a green and tranquil vista on the very edge of Mexico City’s urban sprawl, and reflects on over 30 years of building egg- and cocoon-like dwellings that are quite literally out of the box.

“When a child is born we put him an incubator, which is a box,” said Senosiain, 68. “Then we put him (in) a playpen. The child is placed in a succession of boxes throughout his life, and then when he dies, he is put in another box.”

“The idea here is to break with the box,” he said, pointing to the 10-apartment complex that, like much in the 1/2 hectare compound, looks like a snake with eyes in its body -- architectural homage to Quetzalcoatl, the Aztec “feathered serpent” god of light and knowledge.

At the project known as the “Nest of Quetzalcoatl,” enormous snakes are conformed into passageways, bridges, fountains and walls. The people who live here have to get used to passing through gigantic snakes’ mouths to reach surprisingly spacious if cave-like dwellings filled with soft angles and curves.

Senosiain is not offended by cave comparisons. In fact he kind of likes his homes to look caves. Or wombs. Anything but boxes. He has used whales, snails, sharks and mushrooms as inspiration for previous projects. The buildings often merge into the landscape, sometimes half buried.

True to his form, Senosiain is reflecting on his world view while sitting in a hand-like fiberglass floating chair in the middle of a pond that serves as part of the compound’s water treatment and rain-water collection system.

The Nest sits in front of a rare green patch on the city’s outskirts -- a graveyard on one side keeps the urban sprawl hemmed in -- but from certain angles you can get an eyeful of ticky-tacky cement boxes crawling up bare hillsides, jostling each other shoulder to shoulder and disappearing in the smoggy haze of the distance.

It is this reality that Senosiain wants to take on, to cure, in a sense. 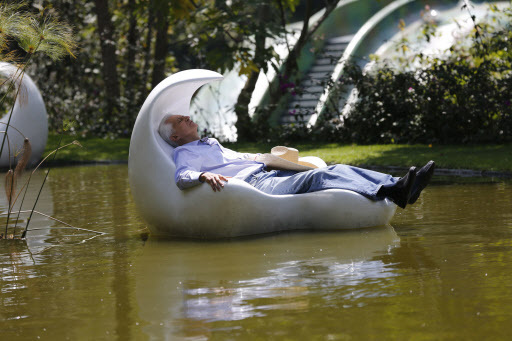 Architect Javier Senosiain sits in a hand-like fiberglass floating chair in the middle of a pond that serves as part of a water treatment and rain-water collection system for his architectural project, the “Nest of Quetzalcoatl,” on the outskirts of Mexico City, on Sept. 14. (AP-Yonhap)
He has just opened a retrospective exhibition of his work at Mexico’s premiere cultural venue, the capital’s Palace of Fine Arts, and the display includes a proposal for prefabricated, low-income housing in a shape that can be compared to an organic airstreamed trailer made of concrete or, as he describes it, a peanut.

Given the super-light spray-concrete-over-metal-frame design, the homes can just be picked up and placed on a footing with a crane.

“You just hook up the light, water and sewer lines, and it’s ready,” Senosiain said.

He proposes placing about 60 of these 28-square-meter micro-homes -- they’re modular and can be combined into bigger houses -- together in a neighborhood, where no house is more than an eight-minute walk from urban services like schools or stores.

So far, no developer has taken him up on the plan, though its time could be near.

Mexico’s big low-income housing builders were hit by a crisis in 2011 and 2012: Some went bankrupt, and others came close, after building hundreds of thousands of units of precisely the kind of housing that Senosiain -- and apparently homeowners – do not like: tiny, rectangular, cookie-cutter boxes placed far outside city centers, far from services, jobs and schools.

Hundreds of thousands of those houses now sit abandoned, and the government, which financed many of the homebuyers, now acknowledges the projects were a mistake.

“It wasn’t easy before; there wasn’t any interest,” Senosiain said of his contacts with the government’s low-income housing agency two decades ago. “But now, I think it is a lot more likely. ... I think now there is interest.”

That can be said of much of his work. It has attracted so much attention that he is building a visitor center and extensive gardens and plans to turn the Nest complex into an educational park for school visits.

“When we built the first house 31 years ago, people thought it was strange. They said, ‘I like it, but I wouldn’t live there,’” Senosiain recalled

“Today, people see it very differently. There is a lot more environmental consciousness, and that is an advantage.”