WASHINGTON -- Republican presidential nominee Donald Trump again denounced the free trade agreement between the United States and South Korea as a "job killing trade deal" and a "disaster," and said the Asian ally should pay 100 percent of the cost for the American troops stationed there.

"It is no great secret that many of the special interests funding my opponent's campaign are the same people profiting from these terrible trade deals. They are terrible. They're terrible for everybody," Trump said in a speech in New York.

"The same so-called experts advising Hillary Clinton are the same people who gave us NAFTA, China's entry into the World Trade Organization, the job-killing trade deal with South Korea, another disaster, and now the Trans-Pacific Partnership that they're pushing so strongly," he said. 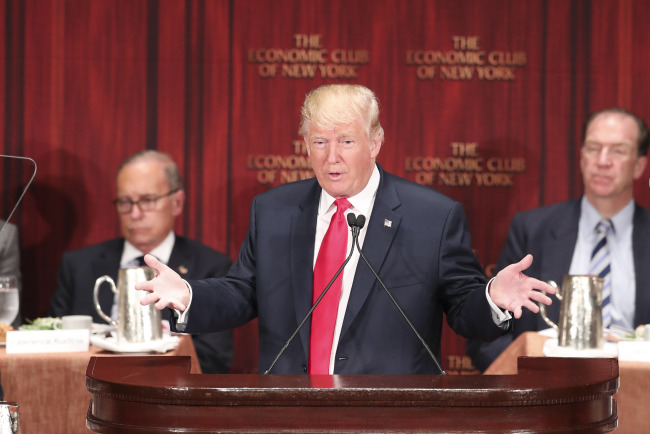 US Republican presidential nominee Donald Trump delivers a speech during a luncheon meeting of the Economic Club of New York in New York, the United States, Sept. 15, 2016. (Xinhua-Yonhap)
In an attempt to rally support from voters struggling with economic woes, Trump has slammed free trade deals as a source of American economic problems. He has not only denounced the trade deal with Korea, but also vowed to pull out of the 12-nation TPP and renegotiate the North American Free Trade Agreement (NAFTA).

Trump also reiterated that wealthy allies should pay more for US defense support.

"I have great respect for Japan but as you know, we defend Japan, we defend Germany, we defend Saudi Arabia, we defend South Korea, we have 28,000 soldiers right now in South Korea. These are economic behemoths," Trump said.

"These are wealthy countries. And when I said they have to pay more, a general came to refute my statement and said, 'Doesn't Mr. Trump know that Japan pays 50 percent of the cost of its defense?'"

he said, referring to remarks US Forces Korea Commander Vincent Brooks made during his Senate confirmation hearing.

South Korea currently pays about half the costs, about US$900 million a year, to help finance the troop presence, and US officials, including Gen. Brooks, said it would cost more to keep those troops stationed in the US than it does in Korea.

The real-estate tycoon has expressed deeply negative views of alliances and US security commitments overseas, seeing them as a cumbersome burden sucking up taxpayer dollars. He has long argued that the US should no longer be the "policeman of the world." (Yonhap)