WASHINGTON -- How to respond to North Korea's fifth nuclear test will be the main focus when US Secretary of State John Kerry holds a meeting with his South Korean and Japanese counterparts, the State Department said.

The top American diplomat is scheduled to hold discussions in New York on Sunday with South Korean Foreign Minister Yun Byung-se and Japanese Foreign Minister Fumio Kishida on the sidelines of the UN General Assembly. 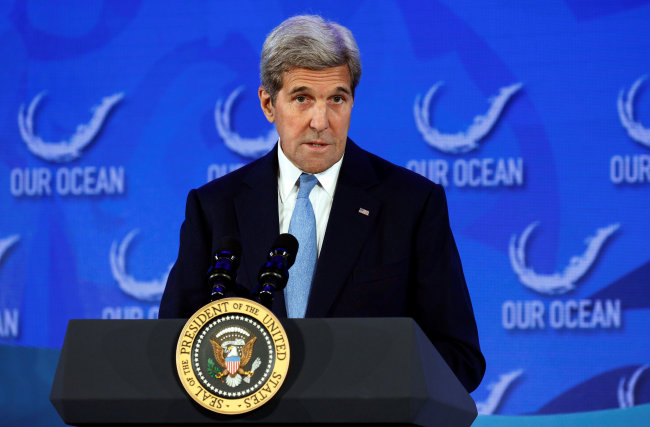 US Secretary of State John Kerry introduces US President Barack Obama to speak at the Our Ocean Conference at the State Department in Washington, D.C., Sept. 15, 2016. (Reuters-Yonhap)
"The meeting, which will be hosted by Japan, will focus on trilateral cooperation, including the response to the September 9 North Korean nuclear test, and will continue the close coordination with these two important US allies on shared regional and global priorities," the department said in a statement.

The three countries strongly condemned Friday's nuclear test and convened an urgent meeting of the UN Security Council. After the meeting, the council condemned the test and pledged to immediately begin work on a new sanctions resolution.

Cooperation from China is key to putting together any meaningful punishment for the North as it is one of the five veto-holding permanent members of the UN Security Council and the main provider of food and fuel to the impoverished North.

China is North Korea's last-remaining major ally and a key provider of food and fuel supplies. But it has been reluctant to use its influence over Pyongyang for fear that pushing the regime too hard could result in instability in the North and hurt Chinese national interests.

Analysts say that China often increased pressure on the North in the past, too, especially when Pyongyang defied international appeals and carried out nuclear tests and other provocative acts, but China never went as far as to cause real pain to the North. (Yonhap)