"They're very belligerent. They have no respect for our country, none whatsoever. And we have a situation that's a potential catastrophe. We have somebody that truly does have nuclear and nuclear capability. The carrier maybe is not there yet, but it soon will be," Trump said during campaigning in Virginia Tuesday.

"We have a man who is, I mean, he's took over -- 25 years old, I guess, or around that -- and now it looks like he's getting more and more hostile," he said, referring to North Korean leader Kim Jong-un. "And what I would do very simply is say, 'China, this is your baby. This is your problem. You solve the problem.' China can solve that problem." 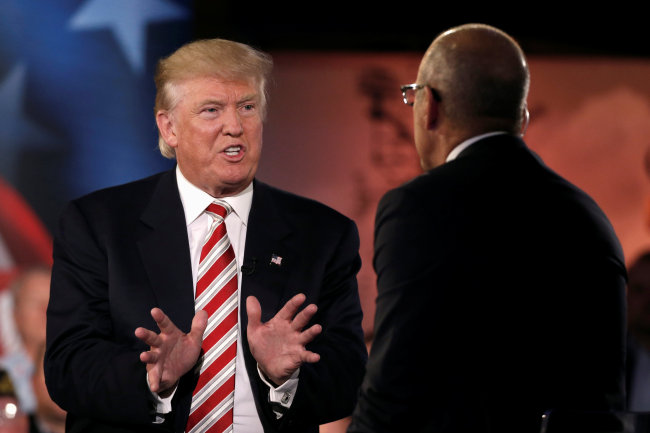 Republican presidential nominee Donald Trump (Yonhap)
Trump has expressed negative views of the North's leader, describing him as a "total nut job" and a "madman playing around with the nukes." But he also said early this year it was "amazing" for the young leader to keep control of the country.

Maximizing US interests through negotiation is the No. 1 point in Trump's "America First" foreign policy. Trump and aides have repeatedly emphasized the businessman is an excellent negotiator and is ready to use the skill to regain American interests lost under Democratic administrations. (Yonhap)