Office worker Wi, 26, often plays soccer at a public field near Gangnam, but he recently faced resistance from some residents who live nearby.

An official from the district office asked Wi and his teammates to avoid playing soccer there at night, as there had been complaints that the bright lights at the field disturbed residents.

“But it doesn’t make sense that we play soccer with the lights turned off. The field is open for all citizens to use,” Wi said.

Eventually, the district office, the residents and the soccer team reached a temporary compromise to use the stadium lights only up to 10 p.m. 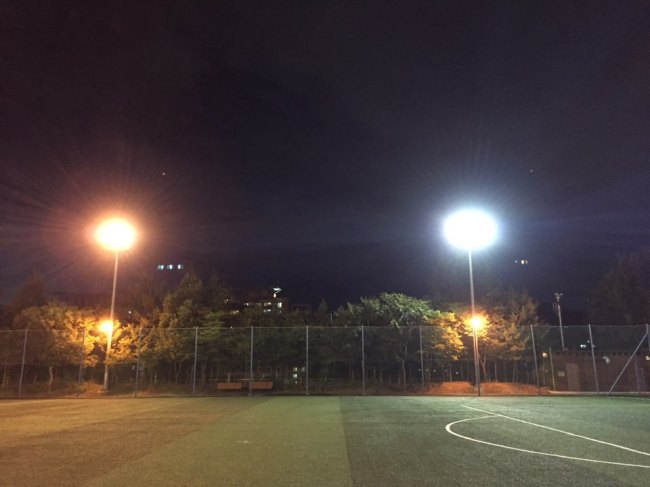 Strong light is emitted from the lights at a public soccer field in Seoul. (Kim Da-sol/The Korea Herald)
This incident was one of 1,216 cases reported to the Seoul Metropolitan Government regarding light pollution last year. There are no concrete regulations restricting the use of bright lights at night, making it difficult for parties involved to reach a solution on light pollution.

According to the SMG, complaints related to light pollution issue have been increasing each year. In 2012, 857 cases were reported and there were 1,571 cases in 2014. Most of them were made by residents who complained their sleep was being disturbed and they were being inconvenienced by bright lights.

Light pollution refers to when an inappropriate use of light disturbs one’s health or living status, or damages the environment, according to the Ministry of Environment.

Most light pollution in the city come from neon-light advertisements on the streets, light-emitting diode light bulbs installed around buildings including restaurants and cafes, and headlight beams from vehicles, among others.

South Korea, along with Italy, have been listed as countries with the most extensive light pollution among the G20 countries in a report released by the Italian Light Pollution Science and Technology Institute in June.

Researchers added that more than 80 percent of the world population suffers from light pollution, while 1 in 3 people around the globe cannot observe the Milky Way from the sky in their home countries.

The report explained that light pollution creates a luminous fog or “sky glow,” which impairs the view of stars and constellations in the night sky.

Light pollution can also be detrimental to health.

In human bodies, light works as a biological trigger that suppresses health-improving functions that should naturally occur in our bodies at night.

Studies have showed that being exposed to light at night can lead to health damages linked to obesity, depression, sleeping disorders and cancers. Scientists have also found an undisputed connection between sufficient sleep and good health.

Meanwhile, the World Health Organization has underlined the importance of exposure to daylight during the day and darkness at night to maintain a routine circadian rhythm. The WHO lists “shiftwork that involves circadian disruption” as a probable carcinogen.

To come up with countermeasures regarding light pollution in the city, the government enacted a light pollution protection law in 2013, but the effectiveness of its enforcement is still under question.

According to the law, each district office is responsible for restrictions on light pollution by designating a so-called environment protection zone for light control. However, conflicting opinions between district offices and owners of restaurants and cafes frequently lead to disputes.

To effectively control the light pollution issue, the Seoul City set up a special committee last year to check and require newly constructed buildings to receive an approval regarding light options.

When neon-sign advertisements which emit strong lights at night are installed in residential areas, their brightness should be under the level of 25 lux, -- the unit for luminance and luminous emittance -- equivalent to the brightness emitted by 25 candles, explained an official from the SMG’s life environment division.

“We are in the course of promoting clearer and specific standards and requirements to cope with the light pollution issue,” the official said.

The SMG also added that it has started to install street lights with automatic light sensors that allow them to be turned on when human motion is detected. This follows the first and successful installation of the “Smart LED road light control system” last year at some dozen streets in Dongdaemun-gu.