“When you tilt an iPad screen equipped with the interactive font system, the font design changes. This is not just for pretty fonts. The system offers customized font design for each user,” said Pyo.

The second edition of the Herald Design Tech event ran from June 21 to Aug. 27, featuring workshops and discussions in which student participants, professional designers and engineers worked together to bring creative ideas to life.

This year’s workshops, under the theme “Smart Design,” explored the new relationship between typography and technology, and focused on creating fonts that cater to the technology-driven life. 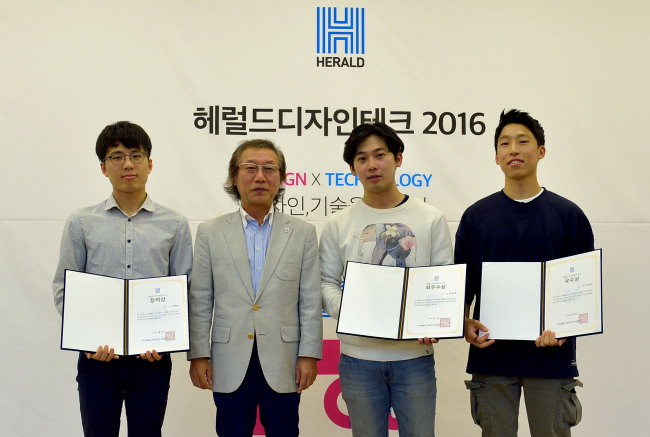 From left: The winners of Herald Design Tech 2016, Lee Jeong-min, Pyo Jun-hee and Oh Min-geun, and the CEO of Herald Corp. Lee Yong-man (second from left) pose at the award ceremony Tuesday in Seoul. (Yoon Byung-chan/The Korea Herald)
“We live in a fast-changing world with the emergence of new media such as big data, virtual reality and machine learning. Herald Corp. focused on the possibilities that communication and creative expression bring, and organized the Herald Design Tech to explore the field of typography as a new medium,” said Lee Young-man, the CEO of Herald Corp., at the award ceremony at the Herald Corp. headquarters in Seoul.

A total of 13 college students participated in the two-month-long workshop where they explored possibilities in innovative design in typography and learned coding to turn their ideas into reality.

Oh Min-geun, a student at the visual communication department of Kookmin University, created fonts that recognize users’ facial features. He won the second top award that came with a prize of 1 million won.

“Fonts we use are catered to print media such as newspapers and magazines. I thought we needed new fonts that are more suitable for the computer-based environment today. That’s how I came up with the font system that changes according to the facial features of each user,” said Oh, who received a prize of 1 million won.

Lee Jeong min from Dankook University, who won the top third award with a prize of 500,000 won, created a font system based on the complex system of the galaxy which changes with the flow of time.

“Words are fixed with a solid style of typography. I didn’t think they should continue to be the way they have been for a long time, and thought of ways to make them like living things,” said Lee.