[ The Korea Herald – Send E-mail ]
[WINE TREND] Korea’s budding winemaking scene
Local vineyards venture into winemaking to tackle grape oversupply and are rewarded with prize-winning wines
By KH디지털2
Published : Aug 26, 2016 - 17:39
Updated : Oct 26, 2016 - 23:50
[THE INVESTOR] YEONGCHEON, North Gyeongsang Province – Popular wines in Korea are mainly sourced from countries such as France, Italy and Spain, but recently, locally produced Korean wines have been carving out their own share of the market.

Korean vineyards started to venture into winemaking in the late 1990s and benefited from an unprecedented wine boom driven by the hit Japanese wine-themed comic “The Drops of God” in the early 2000s.

Vineyards on the island of Daebudo on the west coast jumped into winemaking in 1998 using their well-known Campbell Early grapes. Soon other grape-growing regions followed, including Yeongdong in North Chungcheong Province and Yeongcheon in North Gyeongsang Province. 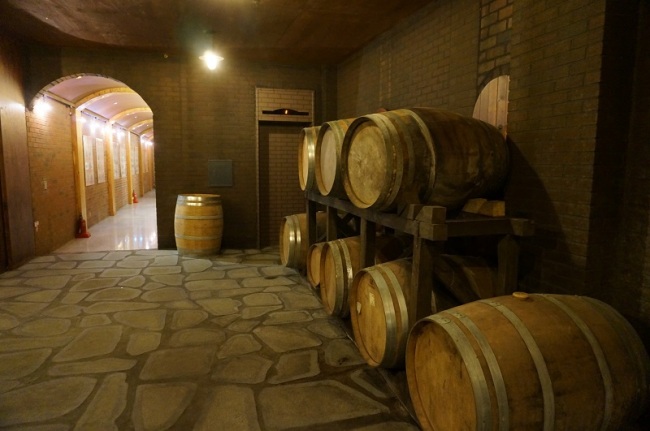 Having joined the winemaking business in 2008, Yeongcheon, with 2,152 hectares of vineyards, is one of the late comers on the wine scene. The local city government of Yeongcheon encouraged and supported local vineyard owners to produce wines, establishing a local government-funded winemaking facility and creating a local wine brand “Ciel,” which means sky in French.

“It started as a way for the local vineyards to survive. Grapes were being overproduced, which led grape prices to plummet, leaving farmers struggling with mounting losses,” said Kang Ill-wook of the Yeongcheon Wine Business Center, during a wine tour on Wednesday.

Today, the area boasts a total of 18 wineries. Last year, 270,000 bottles of red, white, rose and ice wines were produced in the region and the wineries reached combined sales of 3.5 billion won ($3 million).

The Yeongcheon Wine Business Center is the hub of the area’s burgeoning wine production. The underground wine facility is always kept at 16 degrees Celsius to offer suitable conditions for local grapes to ferment and age.

“There are four things to avoid in winemaking -- high temperatures, light, air and tremors,” said Kang. “You don’t want the wine to go through unnecessary fermentation and aging.”

The center studies locally produced wines in an effort to improve their quality. By ensuring balance in flavors and aromas, it attempts to overcome the prejudice that local wines are not on par with imported wines. 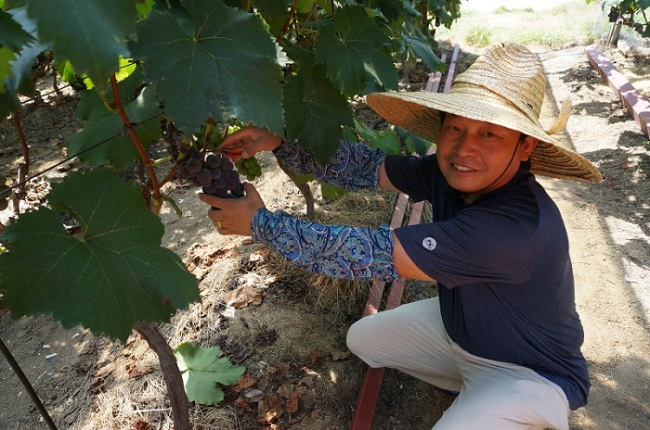 Park Jin-hwan, owner of We winery, picks grapes at his vineyard in Yeongcheon, North Gyeongsang Province. The Investor/Lee woo-young

“As local wineries find it hard to store wines for many years, we store them here to study changing tastes and conditions each year,” said Kang.

The efforts are starting to bear fruit. We Winery, a local vineyard with winemaking facilities, won silver and gold medals at the Asia Wine Trophy competition in 2013 and 2014, respectively. Its 2011 red wine was selected from among more than 2,600 kinds of wines from 26 countries around the world to win the silver medal in 2013. Its 2013 white wine made with Kyoho grapes won the gold medal in 2014.

“Winning the award has changed many people’s perception of locally produced wines. Even wine experts used to say it’s hard to make good wines using Korean grapes, which are low in both tannins and acidity. I proved them wrong,” said Park Jin-hwan, owner and winemaker of We Winery, who manages 9,917-square-meter vineyards and makes wines with grapes harvested the vineyards.

It was only through a lot of trial and error that Park managed to make high quality wines. He even nearly died in an accident at his storage facility. He was fermenting 10 tons of grapes in a stainless steel tank but forgot to open a gas valve. When he opened the tank next day, the vat exploded from the pressure of the gas.

“I will present wines aged in Korean earthenware at the next international wine competition and see how that works with wine experts,” he said.