President Park Geun-hye on Wednesday presided over a national science and technology strategy session to discuss future growth dynamos and ways to breathe fresh life into the country's economy.

During the session that followed the inaugural one in May, the panel selected nine strategic projects aimed at securing the nation's new growth engines and enhancing the quality of life for the general populace.

The panel designated autonomous vehicles, light materials, the smart city model, artificial intelligence and virtual reality as the sectors for future growth, while choosing fine dust, carbon resources, precision medicine and new drugs as the sectors for the improved quality of life. 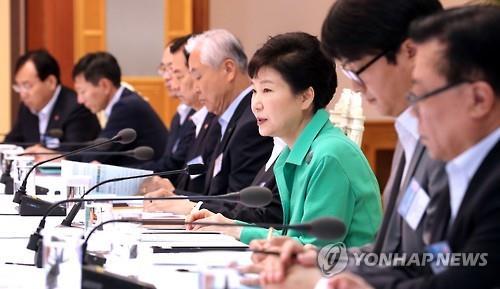 The conference was held as the Seoul government is striving to cope with the fast-paced industrial transformation, dubbed the "fourth industrial revolution" characterized by a fusion of cutting-edge technologies, such as big data and the Internet of Things.

"Ahead of the sea of change in the global market, which is being triggered by the fourth industrial revolution, what is at stake is national competitiveness and jobs for young people," the chief executive said during the session, which was attended by some 40 senior government officials, leading experts and scholars.

"With this in mind, I cannot just sit back and relax."

Park has promoted her "creative economy" drive as the only way the country can tackle myriad challenges arising from the emergence of the fourth industrial revolution. The creative economy refers to Park's core policy initiative that aims to capitalize on innovative ideas and technologies, such as ICT, to generate new business opportunities, create jobs and spur growth. (Yonhap)