Korea's national police chief expressed regret on Monday over the rising criticism that he failed to properly cope with last week's protest rally in the southern county of Seongju that turned violent, triggered by Seoul's decision to deploy an advanced U.S. missile defense system there.

"I hope the incident will induce people to treat each other in a law-binding manner," Kang Sin-myeong, Commissioner General of the National Police Agency, said, urging protesters to respect the rules.

The remark came as protesters who opposed the deployment the Terminal High Altitude Area Defense in the southern town blocked Prime Minister Hwang Kyo-ahn's car for hours and threw water bottles and eggs at him last week, while he tried to explain the government's position on missile defense and alleviate health concerns expressed by locals. 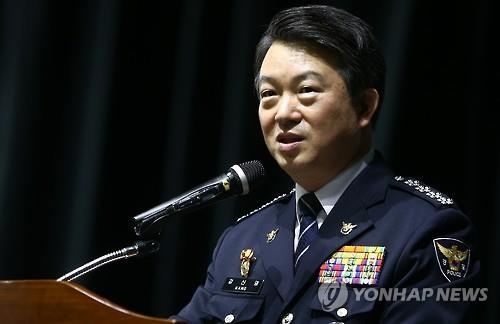 Kang Sin-myeong, Commissioner General of the National Police Agency (Yonhap)
Residents expressed discontent with the move, questioning the transparency of the decision-making process as well as the potential risks to their health.

The police established a special investigation team, which focuses on whether water bottles and eggs can be considered "hazardous tools" or the demonstration itself broke relevant laws.

Residents of Seongju plan to hold a rally in Seoul on Thursday.

Kang, however, did not directly express his opinion on whether the so-called "outsiders" were involved in the violent protests.

"We are currently finding out details of non-resident protesters on the day," Kang said. "But there are no investigations under way (on specific organizations or individuals).

"Rather than define them as outsiders, I believe such people can be sorted as we start investigations into wrongdoings," the police chief added. (Yonhap)